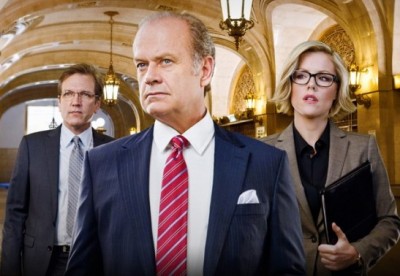 As Tom Kane continues to try to keep a grip on his city and life, the Boss TV series struggles to attract an audience. Will Boss be cancelled or renewed for a third season of Starz? That’s an even bigger challenge thank Kane’s.

Airing on Friday nights, Boss revolves around the Mayor of Chicago (Kelsey Grammer) who’s recently been diagnosed with a degenerative neurological disorder. Determined to remain in charge, he conceals the disease from everyone around him except his physician. The Starz TV show also features the talents of Connie Nielsen, Hannah Ware, Jeff Hephner, Kathleen Robertson, Troy Garity, Rotimi, Jonathan Groff, and Sanaa Lathan.

It’s no secret that the TV series struggled in its first season. Despite sporting some top talent, the viewers and ratings just weren’t there. Luckily for the cast and crew, the show was renewed for a second season weeks before the show even premiered. Had the cable channel waited to see how well Boss would perform before making a decision, it’s hard to believe we’d be seeing a second season now.

Last month, at The Television Critics Association press tour, Boss showrunner Farhad Safinia said, “I am completely aware of what the numbers are, and I’m heartbroken… It’s one of those things where you’d like more people to see what you’re doing… I do hope the audience comes to see it so we can tell the entire story. I think we just have to work on that assumption that we will get to do it.”

The ratings were so low for the first season of Boss that they’re often very difficult to locate. We do know that Boss premiered last October to 659,000 viewers and by the middle of the run had fallen to 250,000.

Season two certainly hasn’t been bringing any better ratings. The August 24th installment drew just 229,000 viewers and the season has averaged only 310,000. Earlier this year, the second season of Spartacus averaged 1.35 million on Friday nights in the same timelot.

It seems highly unlikely that Starz will be bringing back Boss for a third season. These numbers are just incredibly small for an expensive scripted drama.

On the positive side, Safinia has indicated that they plot each season like a movie so that each has a beginning, middle, and end. While it’s very likely that Boss will be cancelled, at least the show’s loyal viewers will be given at least some kind of resolution by the end of the season. Season two wraps on October 19th.

What do you think? Do you like the Boss TV series? Why do you think it hasn’t caught on with a bigger audience? Should it be renewed for a third season or cancelled?

This is the best best best best tv series I have ever watched. I am also such huge fan of Kelsey now after this show!, but I was not a fan before.. how can you even consider canceling? You rely on the numbers? I think the network is the issue and a new network should pick this up. You would be crazy if you don’t. This show is the only show that kept me on the edge of my seat all time.

Too good to cancel!

Please do not cancel this show. It keeps me on the edge do my seat. I have tols so many people about this show that 7 of my friend just changed cable providers so that they can pick up Starz network to watch the show. This show is the talk at the water cooler at work. Homeland, Scandal and Boss are the top show talked about. If there are not viewers watching Starz, please,please, please air it on HBO or Showtime, I think the problem is that so many people don’t have Starz and have not had the pleasure of… Read more »

it would be a tragedy to cancel such a great drama and story that has captured me and my family and friends heart it has been a long time since we have seen such a great performance from this cast.

Sooo loving BOSS…This is the best tv drama I’ve seen in a long time. Great script, excellent actors and very ADDICTIVE. Just like (Sharon B.)I also had Boss parties every Friday with my girlfriends (10, to be exact) which lead to discussions, debates and good food. We sre all devastated that this show is being removed. Five of the Ten of us renewed our cable subscriptions so that we could keep STARZ and continue to watch our favorite show. Now we will be letting STARZ go since they removed the only show that drew us to them. I hope and… Read more »

Boss is a great show! Kelsey Grammar, Connie Nielsen, and TI are great. I hope Starz reconsiders and brings this great written show back.

SO disappointed Boss was cancelled.REALLY enjoyed that show

This is one of the Best show on cable!! Please bring it back. Great cast, great story line. Love this show!

It never ceases to amaze me that when theres a really great drama like Boss viewership is low and it is cancelled. This is a great show but needs a new home, maybe HBO would consider taking it on. Everyone that I have turned on to this show loves it, even Oprah!

OMG Im so devastated I cant believe this series is even being considered for cancellation. This is the best drama In years, excellent acting; I had Boss parties every Friday with my girlfriend which resulted in discussions and light drinks I cant believe this when all these ridiculous reality shows continue to be developed and remain on. SMH

Brilliant, addictive,brooding, fabulous, I too hope Boss gets picked up by another network

Hey why Boss ?… I love Boss, Kelsey Grammer it breathe taking to watch in this character. Please some network pick this show up.

Best tv drama in years. Intelligent script, excellent actors and production values.
Maybe the subject matter is too political for the sponsers.

I got the Starz channel because of Boss. I shall be thinking about cancelling Starz if Boss does not come back. This is Kelsey’s best work. Bring it back soon.