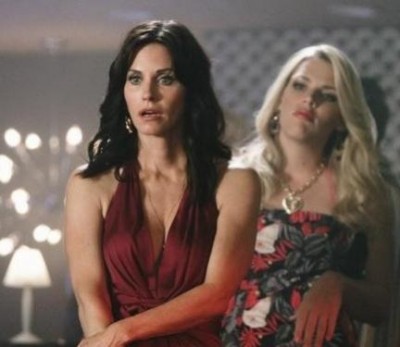 Late today, ABC released their mid-season 2011-12 schedule and it contained a few surprises. For one thing, Cougar Town was completely MIA. Has the Courteney Cox sitcom been cancelled?

Last January, Cougar Town was one of six shows that were given very early renewals by ABC. Season three was initially expected to debut sometime this fall but ABC decided to hold it until late November. The programmers planned to air it Tuesdays at 9pm, once Dancing with the Stars had finished in the fall and before the new spring season had begun. It was to be paired with Apartment 23 (now called Don’t Trust the B– in Apartment 23).

Creator Bill Lawrence has said that he hounded ABC head Paul Lee to give the show the chance to lead-off an hour rather than rely on Modern Family’s coattails. He was happy to be paired with Apartment 23, the network’s favorite new sitcom of the season.

The schedule change meant however that Cougar Town’s 22 new episodes might not air during the regular season, simply because the network might not have enough slots left in the schedule. Lawrence said that he was fine with a few episodes airing during the spring or summer.

Cougar Town’s return was then pushed to later in the season and was expected to kick off in early 2012, still paired with Apartment 23.

Flash forward to today’s announcement and the Tuesday night schedule is very different than expected. Neither Apartment 23 nor Cougar Town are on it. ABC initially maintained that both would air sometime in the Spring.

Now, Deadline reports that ABC has cut the show’s order from 22 installments down to 15. The sitcom’s expected to return in March, once Work It completes its Tuesdays at 8:30pm run. (If that show tanks, it seems very possible that Cougar Town could return sooner.)

Lawrence, who’s expected to leave the show after this season, has been tweeting since the announcement and he doesn’t seem all that happy. He wrote, “Look, ABC put this show on for three years, and it’ll be on for at least three more. I’d bet on it. Really? Yes, and I’m sober. Sort of.” Lawrence followed that up with, “Will vent later. Must go edit episode that will be on in… sometime. Enjoy Celebrity Wife Swap on ABC. Your kids should watch.” Then, “6 seasons and a movie…? please…” and finally, “I’m not embarrassed to be proud of… #cougartown”

What do you think? Is this a bad sign or a REALLY bad sign? Will this move end up getting Cougar Town cancelled?

Can’t believe they are doing this! I love Cougar Town and have been waiting for it to return. ABC….Wife Swap, Wipe Out, instead? REALLY????? And I loved Pan Am too! It was smart and so refreshing! What is wrong with you people at ABC??? I will NEVER watch that other crap you chose to keep.

I just realized the show wasn’t on, searched it on DirecTV, and nothing. Googled it and found this. I’m SO UPSET that one of my 2 favorite shows will not be on. Thie is crazy ABC! MF and Cougar Town made-up my favorite night of the week. ABC, PLEASE get it together, and bring back one of the smartest shows on television. My husband even loves CT, and he’s a Texas country boy! (37 year old country boy, my pet redneck…). If he likes it, it will appear to everyone who gives it a chance. If people look past the… Read more »

ABC has cancelled All My Children, One Life to Live, Cougar Town & Pan Am but left us with 3 Bachelor kind of shows, NOT reality, DWTS (yuk) & the most stupid show ever conceived, “wipe out.” Who in the H$^* watches that crap? I am DONE with ABC & I hope all their millionaire execs go broke, jerks!

ABC has turned what was a great sitcom in Stepford Town. It’s the same thing over and over again. Bring it back i its original form or cancel it!

how could ABC think it’s a good idea to air Work It over Cougar Town to begin with?

They need to stop over thinking it and just put Cougar Town back on the air. ITS THAT SIMPLE, JERK A** EXECS.

Hated not seeing CougarTown … I didn’t realize a funny and heart-warming series would just disappear. We need more comedies not more cop dramas. Gosh aren’t you sick of it cop drama every nite it’s predicable. BRING BACK COUGAR TOWN .. do a marathon so everyone can see how funny and heartwarming this program is…. thats how I got hooked on SCRUBS.

I love Cougar Town and I just don’t understand why they have to mess with a cute show and leave all the crap on the air. COME BACK COUGAR TOWN!!!!

I think we can all agree that virtually all the network execs are idiots. Anyone that believes inserting 6 months or more between seasons of a show is not going to adversely affect it is a moron. I look back to the good old days when you could depend on a season starting in September and ending before the summer. Now you have no clue when a show resumes after a season end so you miss a couple of episodes and then if it wasn’t one of your absolutely must watches you abandon it. Enough people do it, poor ratings… Read more »

“…The sitcom’s expected to return in March, once Work It completes its Tuesdays at 8:30pm run. (If that show tanks, it seems very possible that Cougar Town could return sooner.)” I hope ‘Work It’ does tank. Sounds like a remake of ‘Bosom Buddies’ (I wonder if they will use the same Billy Joel song for the theme). I have no interest in that show. I’ve already seen it nearly 30 years ago. I’m sure it will be the same situations and the same jokes as before. I don’t understand what goes on in the executives offices for network TV. Fox… Read more »

Am I the only viewer who doesn’t miss Cougar Town? I watched Cougar Town when it first premiered. Loved the show. Then the powers that be decided to change the concept and even considered changing the title of the show. Somehow they’ve turned this show into another dimwitted sitcom.

Really irritated with ABC right now. I agree with everyone else that these inconsistent and bonehead moves are a great way to kill a show. It’s the fans that get screwed. Hoping ABC starts showing repeats of Cougar Town for the viewers to find it before the new season begins.

Well, there has been some buzz about the split of Courtney Cox Arquette and David Arquette. I do believe this was their Baby, and maybe that is playing a part in the network’s decision. I personally love Cougar Town, and was eagerly looking forward to its new season. But now they have canceled so many good shows, it just doesn’t suprise me anymore that they would play around with a show that could earn them money, and then blame the lack of ratings when the viewers stop trying to find it on the schedule after giving up on the stupid… Read more »

He wants to lead off an hour, and so the whole show gets bumped. Lawrence should have taken Happy Endings place after Modern Family and given ABC a very strong Wednesday, and Cougar Town a full season of episodes. I don’t know what Lawrence has going on in his head, but with no repeats of Cougar Town, and the show not coming back until 2012, it has been a very long time since anyone has seen an episode, and it seems that people will forget all about the show and the audience will disappear. Good way to kill a show.