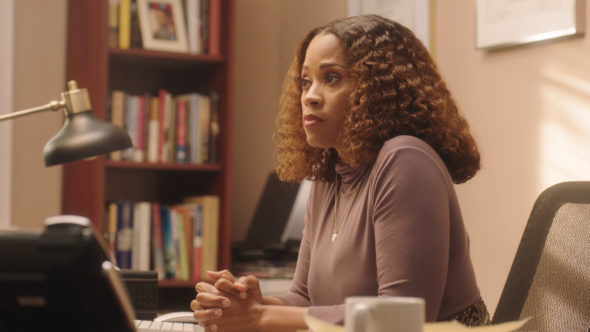 Court has been dismissed and so has Delilah Connolly. OWN has cancelled the Deliah TV series so we won’t be seeing a second season.

A drama series created by Craig Wright, the Delilah TV show stars Maahra Hill, Jill Marie Jones, Susan Heyward, Ozioma Akagha, Candace B. Harris, Kelly Jacobs, Khalil Johnson, and Braelyn Rankins. Delilah Connolly (Hill) is a headstrong and highly principled lawyer who lives in Charlotte, North Carolina. She left a demanding white-shoe law firm a decade ago and hung up her own shingle so she could make raising her kids her top priority. Now, she takes on cases the big firms ignore and finds herself, more often than not, going head-to-head with the powerful and privileged as she fights for the disenfranchised. In addition to raising her two kids, Maia (Jacobs) and Marcus (Rankins), Delilah also cares for her young nephew Dion (Johnson) and manages her relationship with her frustrating ex (Lyriq Bent). At work, she has the support of her new and ambitious assistant, Demetria Barnes, (Heyward) and Harper Omereoha (Akagha) Delilah’s unfailingly sunny secretary. As the series begins, Delilah’s about to go up against her best friend, Tamara Grayson (Jones) in court for the first time. Delilah has always represented the underdogs while Tamara has always represented the wealthy and powerful.

Airing on Tuesday nights, the first season of Delilah averaged a 0.05 rating in the 18-49 demographic and 321,000 viewers.  The eight episodes aired in March and April of last year and the show was a moderate performer for OWN.

While Delilah has ended, Deadline reports that Hill will still be busy. She’s been cast to star opposite Jesse L. Martin in The Irrational, a drama series pilot for NBC. It’s based on Dan Ariely’s Predictably Irrational novel. The show follows Alec Baker (Martin), a world-renowned professor of behavioral science. He lends his expertise to an array of high-stakes cases involving governments, law enforcement, and corporations with his unique and unexpected approach to understanding human behavior. Hill will play an astute and intelligent FBI Agent who ends up teaming up with Martin’s character. The pilot will be filmed in the next month and the project’s fate will be decided by NBC after that.

What do you think? Have you watched the Delilah TV series? Are you disappointed to hear that it’s been cancelled and won’t have a second season?

Very disappointed the show was cancelled. I had several of my friends watching the series and they really enjoyed it too. I think networks don’t give enough time to develop the shows before they cancelled them.

I AM SO DISAPPOINTED. THE SHOW WAS FAMILY ORIENTED AND I SEE NOW THATS NOT WHAT THE NETWORKS WANT , THEY WANT SOMETHING CRAZY OFF STORY LINE SHOW TO GO ALONG WITH THE CRAZINESS THAT’S HAPPENING THE WORLD. PLEASE STOP THE MADNESS RECONSIDER THIS SHOW AGAIN PLEASE!