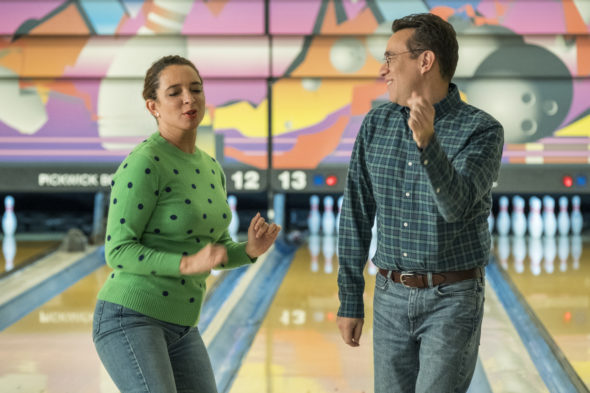 TV show description:
From creators Alan Yang and Matt Hubbard, the Forever TV show is a surreal dark comedy series (not to be confused with the cancelled 2014 drama of the same name, starring Ioan Gruffudd). The story follows June (Rudolph) and Oscar (Armisen), a couple who have been married for 12 years.

Unfolding in suburban Riverside, California, the story kicks off with June and Oscar living a comfortable life, but they’re starting to notice how predictable they’ve become. June persuades Oscar that they need to try new things,. To that end, they decide to take a ski trip, even though neither of them ski.

While they’ve grown accustomed to the same meals, vacations, and even conversations, everything is about to change. This completely unfamiliar territory raises some big questions about love, marriage, and the meaning of forever.

What do you think? Do you like the Forever TV series? Should this Amazon Prime Video TV show have been cancelled or renewed for a second season?

I have watched this series multiple times. This is the best I’ve seen in a long time. Why did it get canceled!?!?! PLEASE BRING IT BACK!! What happens next? My imagination can only come up with so many scenarios of what became of Oscar and June. I watched this show when it first came out and waiting almost 3 years for someone to bring it back is killing me!!

This was the best series I’ve seen in a long time. I cannot believe there is not going to be a second season! 🙁

Really loved this Series of one Season! So disappointed it was cancelled!

Love it! Binge watched during pandemic and crushed to find out there is no season 2! Bring it back or at least tell us where Oscar and June were when they came out of the water…

I am late to love this series—I do not love a lot of programming—this was exceptional. Please give us more!

Ahhh! No! What the heck – the first season felt like half a season – they’ve gotten nowhere yet and I really really want to know what’s next. Was this based on a book? Can someone please pick this back up?

I pray they decide to continue this series!!!! Please Amazon!!!

Love it. Hoping it gets renewed!