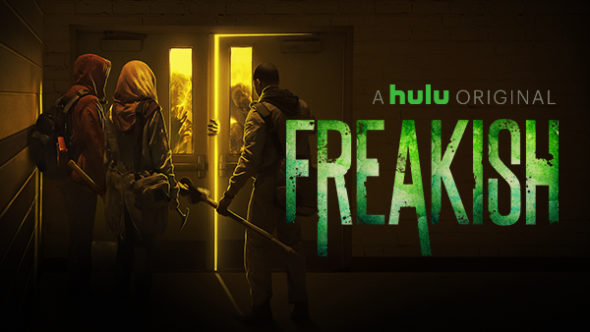 During detention one Saturday, an alarm sounds. As Kent High School students, these kids know the drill. Growing up in a chemical plant town, containment and evacuation practice exercises are nearly as commonplace as study hall.

This time, however, things are different. When the sirens finally cease their screeching, everyone emerges into the school lobby to find an explosion has leveled the town. While there are no signs of life beyond the school’s grounds, those who were unable to seek shelter in the bunker seem to be infected by something or some…thing.

New alliances will form as old friendships are tested. Can anyone here get out alive? How much of this is the fault of the chemical plant, anyhow? Stay tuned.

Series Finale:
Episode #20 — Turning
The situation with the intruders reaches a boiling point. Violet puts herself in a dangerous position to save the others.
First aired: October 18, 2017.

What do you think? Do you like the Freakish TV series? Should this TV show have been cancelled or renewed for a third season on Hulu?

They rlly canceled it. I binged so I first thought that I had just caught up. I’m never watching good shows if this is how they end. Hulu this is your shot at being dominant over Netflix. Bring back Freakish and any show that’s anywhere near as good. Also don’t leave us on cliffhangers if you’re just gonna cancel atleast leave us somewhere that could be a makeshift ending.

Really!!! Why would you just leave the show in the middle like that then cancel it??!!?! At least make a season 3 and finish the story out!!!!!!

I’m so freaking mad that there isn’t another freaking seasonnnn, you can’t just end it like that!!!!!!!!!

We want this show back

I just found this show on Hulu in last few days. I binge watched both seasons, then after s2 season finale find out its cancelled. That SUCKS. BRING BACK FREAKISH HULU. This is way better than walking dead, it’s right up there with Z NATION. U suck HULU we WANT Freakish BACK.

I really enjoyed this, sooo much better than thane the walking dead. I vote for more!!

Really disappointed Freakish was cancelled. Great show, really engaging. Poo on you, Hulu, poo on you.

In my opinion, Freakish is better than The Walking Dead and i will be really glad if another episode came out.

So mad y’all canceled this show!!! I was so in love with it! Shame on y’all! BRING ANOTHER SEASON