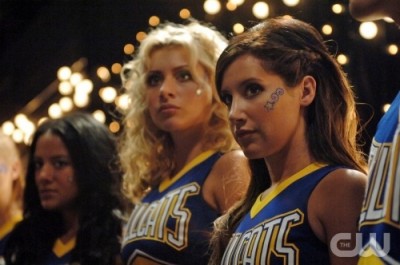 i loved hellcats they have to bring it back

It’s really frustrating that they cancelled one show that actually expressed some good values (like doing the right thing even though it will be inconvenient for yourself– ex when the hellcats agreed to release the info about jake to save travis though they may have lost their scholarships bc of it). Besides it was realllly adictive and filled with good looking people who doesnt love that?
season 2 pleaseeee!!

they should have at least left it at episode 21, it was more complete than 22, which was just a cliff hanger…

i think is the dumbest thing cw has done its one of the few shows i like from there channel and they cancel it…they bring back dumb shows and cancel a good one. i think everyone who loves hellcats should sign the petition.

who cares if its been days or weeks or month i still wanna see what happens after marty speaks to her dad.

BRING THE HELLCATS BACK!!! THIS IS THE 21st CENTURY ALMOST EVERYONE HAS DVRS TO RECORD OUR FAVORITE SHOWS AND THE HELLCATS IS DEFINATLY ONE OF THEM!!! Once people start realizing next season that the Hellcats isnt airing again I guarentee you are going to be sooooo flooded with angry viewers!!!

I think they are actually STUPID ,they have to watch it first and then cancel it .Now i’ll have to find another serial to watch this is so LAME !!

I am tired of seeing my favorite shows being cancelled. Cw was one of the networks I could almost always count on having great shows no matter what and not cancelling them until now. They decided to end smallville just when it was getting to the core and now hellcats too. There is no reason to see the show go and if they can’t keep them on the air they should at least release the rest of the seasons they planned on dvd and I bet they will see they have made one of the biggest mistakes of their lives

Love this show…whoever decided to cancel …ur loss and way to tie up loose ends..butthead

Yes, the acting was mediocre and the plots were weak, but something about this show caught my attention and it quickly became a show that I looked forward to watching each week. I’m really bummed out that it’s being canceled. Maybe another network will pick it up when they see the popularity? I could totally see this on ABC Family.

it’s ridiculous that the CW cancels Hellcats after only one season but bring One Tree Hill back for a 9th! They need to start fresh and Hellcats as a great show with big stars that bring in people. Shows take a while to build up an audience!

is this a joke? im literally fuming. the cw always does this. they cancel a show after it being on air for two seconds. Life Unexpected and Hellcats should not have been canceled. the season finale of hellcats didnt even show. there was supposed to be a episode 23. this is wack.

[…] CW officially acknowledged that Hellcats was cancelled last week. Unfortunately, the finale was shot before the cast and crew knew the TV show’s fate and it […]

Sign the Hellcats petition and hopefully bring the show back for a second season!!!

Some shows take time to build up an audience. Not everything has to be an instant success, sometimes people have to get to know the characters to really give the show a chance. Just look at Parks and Recreation, that show admittedly did not have a great first season, but by season 2 the actors got to know the characters they were playing and the writers wrote in a way that fit there acting ability. Now it’s a very popular show. Besides, the writing was much better than shows like One Tree Hill. This last season of that show was… Read more »

I looked at the ratings, it started to drop after it change nights. CW shifts show and expect nothing bad to happen.