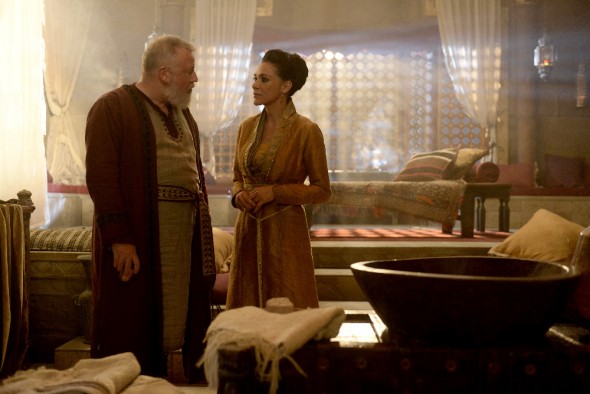 Earlier this week, we reported ABC has cancelled Of Kings and Prophets after two episodes. Now, some of the series’ producers have reacted to the biblical drama’s swift cancellation.

Of Kings and Prophets starred Ray Winstone, Olly Rix, and Simone Kessell in stories based on the Biblical Books of Samuel.

On their Facebook page, producers Reza Aslan and Mahyad Tousi expressed disappointment with ABC’s decision but sounded hopeful about the series getting picked up somewhere else:

As of now, ABC is not airing the drama’s remaining eight episodes. 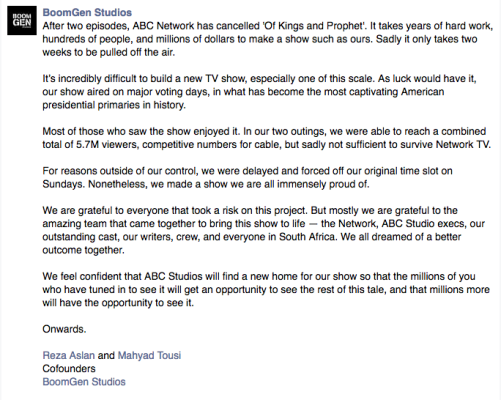 What do you think? Did you watch Of Kings and Prophets? Do you think it should’ve been cancelled? Do you think another network should pick up the series?

I loved this show and was very disappointed when it didn’t air the next week! It’s ashame it has been cancelled. The actors were excellent and the location and sets were beautiful! Costuming , was well done and thought out! And of course the storyline was written thousands of years ago and in my opinion the characters and writing was outstanding! I hope it comes back!! One of the best series I have watched in a long time.

I really looked forward to seeing this show each week. It was truly one of the bright spots on TV. In a world where God is not a popular subject, this show provided hope for many and enlightenment. I hope another network is courageous enough to pick it up. Perhaps even Netflix.

That Show Was Not For The Timid And ABC Proved To Be Just That.

The Show Was Too Much Truth And “They” Don’t Want That Real Knowledge Available To Those Who Are Unaware. However The Truth Cannot And Will Not Be Muffled For It Shall Be Seen And Heard Like A Blast And Sound As Loud As David’s Trumpet!!!

Great show….please bring it back! I would rather watch a show like this than any of the “reality tv” junk……

Please bring this show back on a regular time schedule. I saw the first one. Missed the 2nd as I did not know date & time.
I just watch On Demand. Very good!

I can not believe you cancelled this show after 2 episodes. I am hopeful that you will reconsider & put it back on. It was hard to tell when the 2nd episode was going to be one & I finally watched it On Demand. Would you please reconsider?

Can’t believe they’ve cancelled the show, My whole family enjoyed watching both episodes, it was a start for family night especially with our full grown teenagers what a shame, I cancelled all of my ABC shows.

I’m very disappointed that this show was canceled. It seemed like another spartacus in the making, just when it seemed to get good they cut it

I enjoyed this show and was stunned ABC cancelled after 2 episodes!!! I was looking forward to episode #3 and was very disappointed in ABC!!!!!
To see that timeline in Bible history of the life of David and his journey to become king, to me was very interesting. This show was very well written and produced. The cast did a fantastic job at bringing their characters to life. Great show!!! Please someone pick this show up!!!

Me & My husband loved the show. Hopefully netflix or another channel will pick up the show . They didn’t even give it a chance.

It should be on air , i enjoyed it alot..

I was enjoying it very much. Please put it on Netflix!

I am disappointed this show was canceled… ABC jumped the gun on this one…….