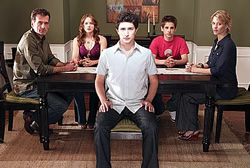 Check again. There are only three seasons.

bring back kyle xy please, it was a such beautiful show !

I know it’s late but better late than never. Please consider bringing back the show in some form. Even if it’s just a mini webisode. If money is an issue I know us fans would be more than willing to donate. Kyle XY is one of those shows that crosses the boundaries of age, gender, and culture and is something everyone can find something in!

we want kyle xy season 4 come back right about now

Kyle XY was more than a show, it taught lessons, love and more. Not only do you get involved in the show but you also embrace it. Bringing this show back for the proper ending is a much deserved and needed aspect to this show. Leaving on such a cliff hanger gives you much anticipation only to find out the answers to this puzzle will not be solved. Matt Dallas and Jaimie Alexander are absolutely amazing together the have such great chemistry when acting. After catching on with an even larger audience once canceled and set into multiple sites to… Read more »

Look, this show needs to continue! My very best friend was depressed. This show changed that! Kyle XY got him looking into science, medicine and technology! It gave him hope that someday we could be like Kyle! It must go on! It breaks every single rule in the book, that was the climax and there was absolutely zero resolution and no closure either! C’mon ABC step up your game or pass the torch to someone else! Period.

PLEASE email the president and CEO, and anyone team member of production from ABC Family that you can letting them know that we want this show back, and that it DESERVES a second chance. It was a great show that didn’t really need to end. Please tell everyone you know to contact the president, CEO, and producers of ABC Family to try to get them to renew the show. We NEED this show back and we can not just sit around wondering what could have happened in season 4, 5, 6, 7,8, e.t.c. Let’s complain and negotiate until Kyle XY… Read more »

I’m so addicted to the show I can watch it over and over. They really should make a season 4 to finish up where it left off.

NOOO! you can cancel kyle xy and defiantly not on a cliff hanger like that at lest give us some closure !!!

I love this show. So much that wasn’t told yet I can’t believe they canceled it. I wish they bring it back, if they did it could b improve on and now people caught on to it since it’s been years later. Please bring it back please

Hi guys. Its really sad to see Kyle xy go. It really was a good series and had excellent family values. If you want to remove a show, at least give it a proper ending…..