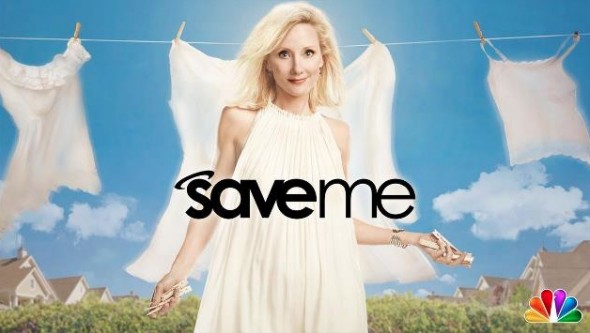 NBC aired only seven episodes of Save Me but 13 episodes were supposedly ordered in May 2012. What happened?

Well, it seems that 13 installments were indeed produced of the Anne Heche comedy but the network opted to only air the pilot and episodes eight through 13. The Futon Critic suggests that the unaired episodes are likely the ones that were shot before Alexa Junge was replaced as showrunner by Darlene Hunt.

Unfortunately, the peacock network has no plans to air the cancelled show’s remaining episodes.

Though there were some devoted viewers, Save Me did very poorly in the ratings and averaged only a 0.6 rating in the 18-49 demographic with 2.78 million viewers. The series finale was the lowest-rated episode.

A complete series set of Save Me may be released on DVD at some point but no plans have been announced thus far.

What do you think? Did you like Save Me? Would you buy the series set on DVD or on iTunes?

I loved this show. I would love to see it come back.

I heard about the show, can’t remember how, and really enjoyed it. I’m always trying
to teach my granddaughter good life lessons (she’s 15) so I had her watch on my DVR
and she got hooked and watched all the ones that were shown. We were both disappointed to learn that it was cancelled and left us up in the air and wanting more.

I think NBC is totally crazy for canceling Save Me, I loved it as did my family.
Network executives don’t seem to know what good programming is anymore.
Afternoons we now have a new program “The Test” it is just ridiculous…
I sure hope another network picks it up, so sad that they don’t even give a show a chance.

Yes, Save Me IS a good show. NBC execs are becoming famous for tossing out the best shows, opting instead for total mediocrity. It either shows their contempt for our intelligence or reveals a truth about theirs. Don’t forget about Harry’s Law; one of NBC’s highest rated programs cancelled because they wanted a “younger demographic !!?” That show had literally EVERY age group represented. NBC…YOU NEED TO PURGE & RESTRUCTURE.

Do the ratings include DVRing a show? I watched Save Me its entire run, but recorded it. I loved the show. It was thoughtful, yet light-hearted and, in my opinion not preachy. It showed goodness, which is so needed especially after watching the evening news! I wish too that another network would pick it up because I know I would watch it! Save Me was a different type of show to watch and that in of itself was great…it wasn’t the same show with a different title…it was unique and missed!

I loved the show. I didn’t think I would when I started watching but got hooked quickly. It was very funny and I loved the lessons that it taught. Especially the underlying lesson in the episode where she was trying to save the hospital. God is always turning what we think is bad into something good…Changing the hearts of people not always the situation or circumstances that we are experiencing. I am sadden that it has been cancelled.

No wonder nobody watches NBC anymore. This leaves Community as the only good show on the network.

The media blitz needed to be stronger. The timing needed to be better (i.e. fall line-up). It was funny, smartly written, and well acted. I am really disappointed to know it isn’t coming back. There really wasn’t another comedy on TV like it. Even if you don’t believe in God, you could see the humor in Beth’s struggles to take direction.

Joseph: I agree completely! Makes me wonder, “What exactly did I miss?”! I also agree with Marcus: Maybe this show would’ve faired better in their Fall lineup! As a mom/wife I DVR most shows, because 7-10PM (Central) is always dinner, bath, bed-time, in our home. I started watching ‘Save Me’ a few weeks in, when they were airing 2 episodes per weekly time slot. Then it dropped to one/week, so I’d wondered what took over. Then, I kept waiting for it to come back, & finally had to look it up to see it was canceled!  NBC was my favorite network… Read more »

It was a great show! I wish another network would pick it up I also would like do no harm to be picked up. nbc is getting real close to being on my discontinued list.

This is sad……Save Me was hilarious. A non- laugh track comedy that was smartly written and well acted. I didn’t watch it when it aired, but downloaded the first episode on iTunes for free and loved it so I bought all the episodes they released. This show could have been a hit if they would have put in it in their normal season by some of their chestnuts. R.I.P. Save Me.

Wow, they only aired the LATTER half of the run? NBC actually skipped from the pilot to so far into the series that it, in all likelihood glosses over any narrative progress the show may have made in the preceding installments?

They really thought the show was THAT bad, huh? Wow.

I didn’t expect to like this show, but actually found it pretty funny.

They managed to cancel the only sitcom I like. It seems to be a trend for them.