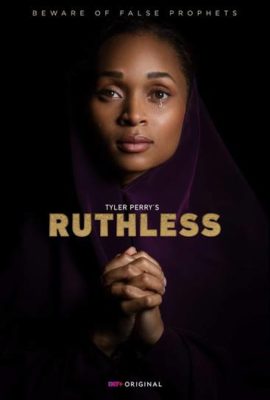 Does Tyler Perry have another hit on his hands? BET+ just announced the premiere date for Perry’s new TV show, Ruthless, Deadline reports.

What do you think? Are you a fan of Tyler Perry? Will you check out Ruthless?

I love this TV show please bring it back on

Ruthless remind me of what we saw in the lifetime movie of Jim Jones whom was a cult leader and killed all those innocent person with cyanide poison koolaid. Please bring RUTHLESS. HAVE AND HAVE NOTS, AND IF LOVING YOU BACK ON TV PLEASE. THE SERIES WENT OFF AS CLIGGHANGERS AND THAT IS NERVE RECKONING. TYLER PERRY PLEASE GIVE US MORE OF THESE SHOWS

When will Ruthless return? It left off with Ruth being in a circle for all the males in the cult to have sex her and the young teen was violated by the leader and the detective ‘s wife was drugged and gang raped. So when will we see more of Ruthless

Hated it. It is not close to Tyler Perry’s work.

What’s going on was ruthless canceled. I was all hook it dealt with alot of issues going on in the world today. And then no episode 4

What’s going on with Ruthless. I’ve only seen 3 episodes, is it on another Network

I really admire Tyler Perry in his creativity. I watched all of his Madea episodes and some of his series, and movies. But something is a bit off to me in the way that he impicts Women especially black women in most of his movies. Maybe he grew up seeing weak or hostile black women in his family I’m not sure or maybe this is just his view of women in general, I don’t know, but Mr. Perry all black women aren’t weak or hostile. And I think this new show Ruthless is a bit over the top at best… Read more »

Yes, I am a Tyler Perry fan and will continue to watch!

This one looks so interesting and I believe this will be another dimension to the innovating and creative expression of Tyler Perry. I am so excited about it and can hardly wait for the show to begin.