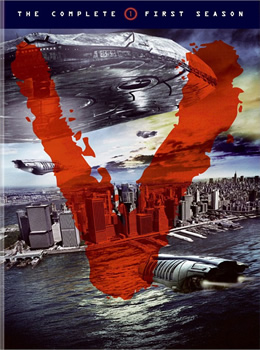 The second season of V premieres on January 4th and one lucky person will be able to catch up by winning the first season on DVD! This series combines sci-fi thrills with dazzling technical virtuosity to tell a story of peaceful aliens with sinister motives and the fledgling resistance to their rise on earth.

The V story revolves around Earth’s first alien encounter when huge motherships appear over 29 major cities. Known as the Vs, the visitors seem human-like, and are equipped with numerous gifts of technology and healing knowledge. They are received as saviors, who are willing to share their capabilities for the small reward of sharing Earth’s resources. However, a resistance begins with a group of skeptical humans who suspect that the Visitors are not as awesome as they seem. They soon discover that the aliens have infiltrated Earth for years and, indeed, have a shocking agenda.

Season One of the new V has just been released and the three-disc set includes all 12 episodes from the first season and special features including, Breaking Story: The World of V (Taking a Fresh Perspective on the V Mythology), The Actor’s Journey from Human to V (Cast Members on the Techniques, Challenges and Rewards of Reimagining a Classic Tale for a New Generation), An Alien in Human Skin: The Makeup of V (Makeup Application and Execution), Fruition (executive producers commentary on episode 11), The Visual Effects of V (A Primer on the Series’ Jaw-Dropping Visuals Includes a Fascinating Tour of FX Powerhouse Zoic Studios), and unaired scenes.

Guidelines: This giveaway is open to participants with a United States mailing address only. (International readers can enter if they have a friend in the States who can accept their prizes by mail.) Many may enter but one person will win. You must be 18 and older to enter and no purchase is necessary. Contest ends December 6, 2010.

Network is doing a bad job at pushing this show though, with them doing that initial hiatus then now bringing it back in January.. Hard to keep up with it with the average veiwer. Im sure the people who love the show will stick with it, but there are alot of average viewers that would give up on the show and of course, get bad ratings…

I’m really curious to know what a half-human/half-V child would look like.

and to see Jane Badler as a V again 🙂

was a fan of the show, miss it already

This show better not get canceled like everything else! We need a decent sci fi show to keep up guessing.

If it gets the proper promotion (with heavy plugging Jane Badler), the show should do fine.

I have the original V series in my Netflix queue but haven’t gotten to it yet.

I love the show and hope it stays.. Nothing really like it on TV atm and we need shows like this…

V…visitors, villains, the shape of the incision they make to check if you are a V…the formation geese fly in…V!

I love V. It’s one of my new favorites.