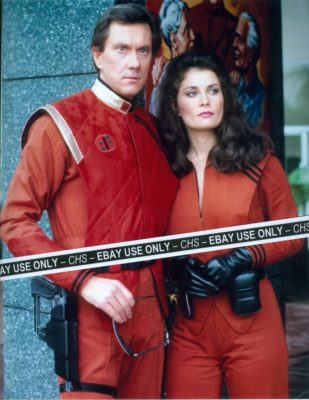 Will V ever make it to the big screen? Series creator Kenneth Johnson recently revealed plans for a film adaptation aren’t dead yet, Syfy reports.

Originally a 1983 miniseries, the sci-fi drama chronicles the invasion of an alien race known as the “Visitors” and the Earth resistance trying to stop them. The original limited series ran on NBC and was later made into a series that lasted one season. The show was rebooted in 2009 on ABC but was cancelled in 2011.

During this year’s San Diego Comic-Con, V creator Kenneth Johnson revealed there are still plans to adapt V into a feature film. Apparently, concept art for the movie was shown at the panel and Tim Field has been added as a producer.

Additionally, the original 1983 V miniseries is set to be released on Blu-ray later this year.

What do you think? Have you seen V? Would you watch a movie version?

The human race needs to be woken from the Bliss and to finally destroy the queens and their eggs in a surprise chemical attack that only affects the ones with dominant DNA. Morena Baccarin’s Anna must die by disintegration

Yes, please do another V series from where it left off in 2011 and I would deffo watch a V movie…absolutely loved this series! Please please please 🙂