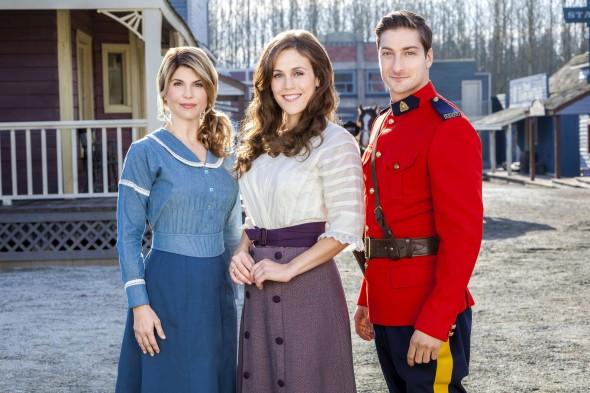 Good news for fans of When Calls the Heart. This week, Hallmark announced they are developing a spin-off to the popular TV show called When Hope Calls.

A light-hearted drama, When Calls the Heart centers on Elizabeth Thatcher (Erin Krakow), a young teacher from a high society background whose life completely changes when she is assigned to teach in a coal country classroom. The cast also includes Daniel Lissing, Lori Loughlin, Jack Wagner, Martin Cummins, Pascale Hutton, and Kavan Smith.

When Hope Calls is being developed for Hallmark’s streaming service, Hallmark Movies Now. The series is slated to debut in 2019.

Meanwhile, season six of When Calls the Heart is expected to premiere on Hallmark Channel in early 2019.

“‘When Calls the Heart’ has developed a passionate community of loyal viewers and we wanted to serve their increased appetite by developing a spin-off series that we know will evolve into another beloved classic,” said Michelle Vicary, Executive Vice President, Programming and Network Publicity, Crown Media Family Networks. “‘When Hope Calls’ is a seamless fit to debut on our streaming service, Hallmark Movies Now, and speaks to our dedication to our loyal fans.”

Hallmark Movies Now launched on October 3, 2017. Subscribers to the service have access to nearly 1,000 hours of family friendly content not available on Crown Media’s linear channels, with new programming available every week. The SVOD service is available on iOS, Android, Roku and Amazon Fire, among other devices.”

What do you think? Do you watch When Calls the Heart? Will you check out When Hope Calls?

No not if it’s not on Hallmark Channel

I am so glad When Calls The Heart is coming back on. Hallmark Channel is our most watched channel. It is a good wholesome channel that my whole family can enjoy.

I wish that Hallmark Now was also available to some of us older viewers that do not have a smart tv.

I love Hallmark, and watch it all the time, but I don’t have a smart tv, so Hallmark Now is not available to people with older tv sets.

Please tell me that Jack isn’t really dead!!! That the person was not Jack but face marred so they couldn’t tell. Hopefully Jack was injured and has amnesia!!! That would make several great shows with him getting back to Hope Valley and Elizabeth!!!

Yes I watch it and I love it and I would love to see Jack come back on the scene.

Yes, we have watched “When Calls the Heart” since it’s beginning, and really love it!! However, I’m not pleased to learn that the spinoff “When Hope Calls” will only be available on the new Hallmark Now channel. This would mean additional charges on our Direct TV bill in order to get this channel. We already pay more each month to get HMM channel, on which we enjoy several special shows. Why can’t this new series be added to HMM? We live in a small town and have few options for TV subscriptions, so sadly probably won’t pay more to see… Read more »

Maybe you could have Jack come back maybe they didn’t find HIS body AND HE SURVIVED somewhere and finally traveled back to them!!! Very sad he’s gone

Love love love the show but we had to cancel our tv subscription moblie phone was more important could I watch on it or firestick??? I bought that.
I do loved watching that one show a week specially in Sunday night just made my whole week!!!!! Thank you

I’ll give the spin-off a try, but I’m (along with many more) will not be watching WCTH any more. What a ridiculous way to write Jack out. The producers knew he was leaving and should have killed him off when he went up north. To come back and do the whole wedding thing was absurd and then have Elizabeth be pregnant?? No thanks. They’ll have her grieve for two minutes, then meet some other love interest … just no thanks. I’ll see what happens with the spin-off.

So disappointed when they killed of Jack…way to soon in the season….that is what drawed people in to the series…

I am very excited to hear there will be a spin off..I’ve watched the show since the beginning and have craved for more like programing that can be watched by the whole family…thank you.

So very excited to hear there’s going to be a ‘spin-off’!! I love all that the Hallmark channels offer ..if I didnt have a job and have to work..I would be very comfortable and pleased to just sit and watch all the Hallmark Channels and their shows. So YES!!! I will be watching When Hope Calls along with WCTH!! I have the complete sets of each season but 5, and I will be getting that as soon as it becomes available!! And I totally love Countdown to Christmas and that it runs 24/7 from end of Oct !! It is… Read more »

I luv, luv, luv, When Calls the Heart. I was devastated when Daniel Lissing left. I really love the dinamics between Erin & Daniel. Their roles were so pivotal to have him gone was an awful blow to the series. I heard that she will have a love interest brought in, it took 5 years for their relationship to developed how anyone can take his place, I can’t see it. But when I read the spin-off with Daniel I was grateful. Thank you for this, I am elated!!!! Can’t wait to join this series plus I will always continue to… Read more »

It’s wonderful to know that WCTH will be returning for a 6th season. And it’s delightful to hear that Hallmark has announced a spinoff series. However, being a true and dedicated #hearties, I cannot bring myself to be enthused even by WCTH returning without Jack and Elizabeth together,with Jack being alive, healthy and Elizabeth pregnant as in the season 5 ending. I am totally a fan of Jack and Elizabeth being together. The love Jack and Elizabeth share on the program, is so real. Their chemistry is perfect!!!!! I keep begging Hallmark to please bring Jack back. No matter what… Read more »