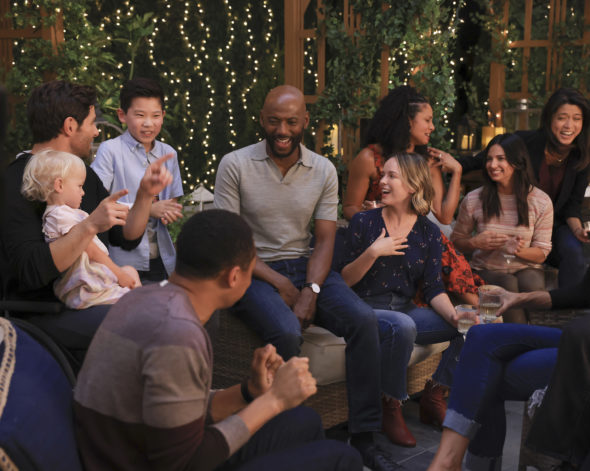 Can these friends stick together as life seems to pull them apart? Has the A Million Little Things TV show been cancelled or renewed for a fifth season on ABC? The television vulture is watching all the latest cancellation and renewal news, so this page is the place to track the status of A Million Little Things, season five. Bookmark it, or subscribe for the latest updates. Remember, the television vulture is watching your shows. Are you?

Airing on the ABC television network, A Million Little Things stars David Giuntoli, Romany Malco, Allison Miller, Christina Moses, Grace Park, James Roday Rodriguez, Floriana Lima, Tristan Byon, Lizzy Greene, and Chance Hurstfield with Stephanie Szostak recurring. Set in Boston, this series revolves around a tight-knit group of friends who are each feeling stuck in different aspects of their lives. Their worlds are rocked when one of them unexpectedly takes his own life and this horrific event serves as a wake-up call to the others. In season four, the group comes together once again in aspirational and uplifting ways as they help each other through life’s unpredictable curveballs. Friendship isn’t a big thing — it’s a million little things.

The fourth season of A Million Little Things averaged a 0.26 rating in the 18-49 demographic and 1.90 million viewers. Compared to season three, that’s down by 38% in the demo and down by 30% in viewership in the live+same day ratings (including DVR playback through 3:00 AM). While these numbers don’t include further delayed or streaming viewing, they are a very good indicator of how a show is performing, especially when compared to others on the same channel. There can be other economic factors involved in a show’s fate, but typically the higher-rated series are renewed and the lower-rated ones are cancelled. Find out how A Million Little Things stacks up against other ABC TV shows.

What do you think? Are you glad that the A Million Little Things TV show has been renewed for a fifth season? How would you feel if ABC cancelled this TV series, instead?

I love this show, yes true I usually watch it on demand or on Hulu but that’s because I don’t like it on Wed. night. they should have kept it on Thurs. after Grey’s anatomy. I hope they don’t cancel it.

When is the announcement for renewal or cancellation gonna be announced. For A Million little things ?
It is a great show, when y’all do make up your mind I hope it is for a renewal. It is better then some of the other shows that were renewed….

Seems like it’s time to end this series. The last episode was like a finale, sweet but really boring.
The story lines and characters are just not interesting anymore.

I hope there is a fifth season. ABC should renew for a last season!

Renew this show!!!! It’s the best show ever and the cast is great.

I loved the first couple seasons.couldnt wait for next season.But now i do not like where the story line is going for Kathrine..and Danny. First of all Kathrine deserves a new love interest .. she is not the type of lady that screws around on first date …your making her look trampy.Please give her a new” good looking ” person…and Danny is to young to be so in love with this rotten kid that keeps hurting him. Hes a kid for crying out loud…After tonights episode with Kathrine kissing the Lesbian for spite in front of mom…was horrible..Your show is… Read more »

Do not cancel this show.. just advertise it more.. I never heard of it before a few weeks ago and I binge watched all 5 seasons. I absolutely love it and I’ll be super sad if it gets cancelled.

I love this show. People love and support eachother no matter what. I hope it is renewed!! I would definitely be upset if cancelled.

Please don’t cancel million little things!!! So many watch this show. Was reading comments how every one wants it on!! We LOVE it and would be upset if cancelled.

Please don’t cancel A Million Little Things. I love this show and can’t wait for the next episode. Now I have a bunch of friends watching it and then we get together and talk about how much we enjoyed it and try to guess what’s going to happen next.
There aren’t very many other shows that don’t have drama and violence. We have enough blood and violence in this world. We don’t only want A million little things to continue but need some more shows like this.

I loved the show the first few seasons but this season went downhill for me real fast. It started last season and this season is just horrible. There is no strong friendship to justify the show anymore. There is NO million little things anymore. It’s personal individuality.

I so love A Million Little Things. Each week brings a new twist. Please don’t cancel this series. We all know that it would be replaced by another hospital show

Love love love this show. It has so many great stories that everyone can relate to ❤️ Amazing acting

Don’t cancel A Million Little Things! I love this show!!!!!!