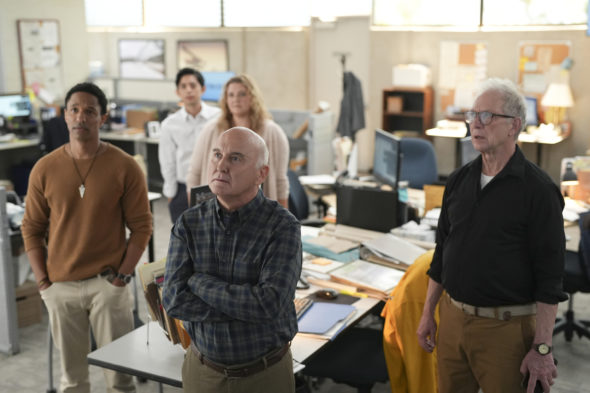 Eileen is in a whole new world. Has the Alaska Daily TV show been cancelled or renewed for a second season on ABC? The television vulture is watching all the latest cancellation and renewal news, so this page is the place to track the status of Alaska Daily, season two. Bookmark it, or subscribe for the latest updates. Remember, the television vulture is watching your shows. Are you?

A drama series airing on the ABC television network, the Alaska Daily TV show stars Hilary Swank, Jeff Perry, Matt Malloy, Meredith Holzman, Grace Dove, Pablo Castelblanco, Ami Park, and Craig Frank. Eileen Fitzgerald (Swank) is an award-winning investigative journalist and high-powered newspaper reporter in New York. Her reporting methods and abrasive personality are called into question after a high-profile story blows up in her face, and Eileen loses her job. Her former mentor, Stanley Cornik (Perry), approaches her about making a big move, and she goes to work for a struggling downsized Anchorage newspaper, the Daily Alaskan. Grudgingly, Eileen teams up with a young local reporter named Roz Friendly (Dove). Together, they begin investigating the murders of a group of indigenous women. In a new locale, across the country, and in a very different world, Eileen is on a journey to find both personal and professional redemption.

The first season of Alaska Daily averages a 0.24 rating in the 18-49 demographic and 2.93 million viewers in the live+same day ratings (including DVR playback through 3:00 AM). While these numbers don’t include further delayed or streaming viewing, they are a very good indicator of how a show is performing, especially when compared to others on the same channel. There can be other economic factors involved in a show’s fate, but typically the higher-rated series are renewed and the lower-rated ones are cancelled. Find out how Alaska Daily stacks up against other ABC TV shows.

Will ABC cancel or renew Alaska Daily for season two? The show is produced by ABC’s sister studio 20th Television (both are owned by Disney) but reviews are mixed, and the ratings aren’t great. I think this show’s fate could go either way and we”ll have to see how the rest of the season shakes out. I’ll update this page with breaking developments. Subscribe for free alerts on Alaska Daily cancellation or renewal news.

What do you think? Do you hope that the Alaska Daily TV show will be renewed for a second season? How would you feel if ABC cancelled this TV series, instead?

Alaska Daily has become one of my favorite TV shows of the year. I hope to see this show renewed for another season. Way better quality TV show than 90 percent of what I see streaming now.

Just binge watching Alaska Daily and find it the best new show of 2022. Intelligent writing, important stories and interesting characters, well acted. Would be a shame if there aren’t more than 6. Too many crap shows. Please renew!!!

Like the other network TV shows, it’s taking a break for the holidays.

Please renew Alaska Daily for season 2! This series is well written, directed and acted. Subject matter is timely and important. Would love to know what happens next.

Worth watching! Well acted, and draws our attention to important themes.

Please continue Alaska Daily. It is a great show with an important story to be told.

Please renew Alaska Daily. One of the great shows. That is interesting and no bad words. Great actors too!

Love the show and thought 6 episodes was not enough. They can’t leave a cliffhanger like that.

My wife and I are riveted by the subject and the acting. Why hasn’t this been done decades ago. Bravo to M’s Swank for being a part of this and creating an impossible story that can be believed. I lived in Alaska 13 years (UAF Geo Eng 1984) and heard the stories but completely lacked the perspective this story brings to another one of the great tragedies the indigenous population has had to bear, hidden behind the politics, money and subjugation. Please continue to tell the story so more will come to understand.

Love the show. All the actors are strong, authentic, marvelous.
Need to know what happens next.

We Absolutely this show and it’s characters. The cast is superb and wouldn’t be the same without them.