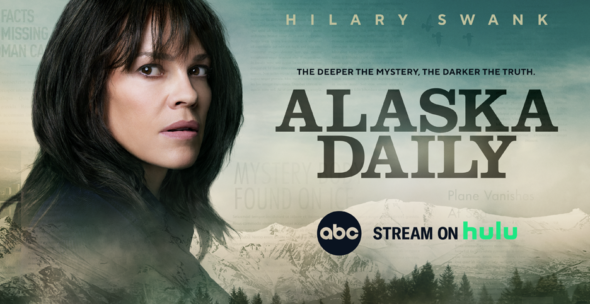 ABC likely has some high expectations for the new Alaska Daily TV series. The drama stars an Academy Award-winning actress and has been given a plum timeslot, following one of the network’s highest-rated shows, Grey’s Anatomy. Can Alaska Daily live up to expectations?  Will this new show be cancelled or renewed for season two? Stay tuned.

A drama series, the Alaska Daily TV show stars Hilary Swank, Jeff Perry, Matt Malloy, Meredith Holzman, Grace Dove, Pablo Castelblanco, Ami Park, and Craig Frank. Eileen Fitzgerald (Swank) is an award-winning investigative journalist and high-powered newspaper reporter in New York. Her reporting methods and abrasive personality are called into question after a high-profile story blows up in her face, and Eileen loses her job. Her former mentor, Stanley Cornik (Perry), approaches her about making a big move, and she goes to work for a struggling downsized Anchorage newspaper, the Daily Alaskan. Grudgingly, Eileen teams up with a young local reporter named Roz Friendly (Dove). Together, they begin investigating the murders of a group of indigenous women. In a new locale, across the country, and in a very different world, Eileen is on a journey to find both personal and professional redemption.

What do you think? Do you like the Alaska Daily TV series on ABC? Should it be cancelled or renewed for a second season?

It is not normally the type of show that I watch, but I love Hillary, so I gave it a try. Glad I did. It took me a few episodes, but I really enjoy it.

I like Hilary and Grace Dove, but the rest of the cast I can live without. I am interested in the central story but I fear this is a one and done series with it now being the lowest demo rated ABC show. I am hoping its resolves the story by the end of this season.

Love the show…great performances. Hope it’s renewed for another season.

Really like the show. It is intelligent with strong performances from the cast. Looking forward to season 2.

Watching. I’ll pretty much watch anything Hilary is in. Big fan.

In the beginning I wasn’t sure about the show, but now I think it is very good. It tells a real story of the life in Alaska and the dangers that Alaskan women face. The show could go another season, but with the main actress Hillary being pregnant in real life the show might not continue. Pregnant with twins at 48, wow.

Love this show.
Both my wife and I like it for the actors writing and meaningful content. It’s also not another machine gun formula drama. I’m going to miss newspapers when they are gone but I’m an old man that doesn’t need everything made in a digital form. I have hope for tech and what the future can hold, if managed with the same level of concern shown but the characters in Alaska Daily.

I am already hooked on Alaska Daily. It holds my attention and the Alaska setting is new and interesting.

I am struggling with this one, I just dont care for the rest of the cast much.

ALASKA DAILY is the best new show this year! Actors and content are great.