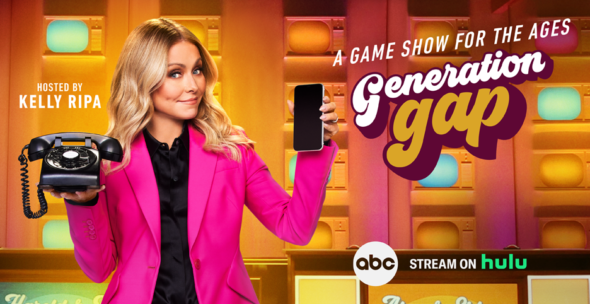 Game shows have become a staple of the ABC summer schedule. The alphabet network recently cancelled several established shows and made way for new ones like Generation Gap. Was that a smart ratings move? Will Generation Gap be cancelled or renewed for season two? Stay tuned.

A comedy quiz show, the Generation Gap TV series is hosted by Kelly Ripa. It’s reminiscent of segments seen on Jimmy Kimmel Live! and The Generation Gap game show from 1969. The competition pits two teams against each other. Each team is comprised of a teen or preteen and a senior citizen — typically a grandchild and grandparent. The teams compete in five rounds of generation-specific pop culture challenges and bank money for correct answers. By the end, one team will be victorious and the players get to keep the money they’ve banked. As a bonus, an even younger member of the winning team is invited out for “Toddler’s Choice.” The tot is given the opportunity to choose between an expensive luxurious prize and a more appealing one for a young child.

What do you think? Do you like the Generation Gap TV series on ABC? Should it be cancelled or renewed for a second season?

I tried watching the first one, it was horrible.

the show is truly awful