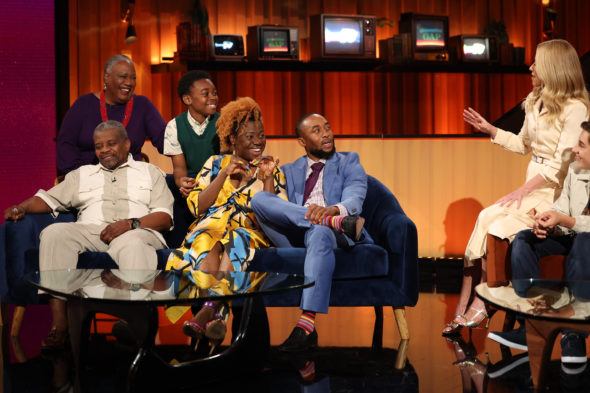 Who will bank the most money in the first season of the Generation Gap TV show on ABC? As we all know, the Nielsen ratings typically play a big role in determining whether a TV show like Generation Gap is cancelled or renewed for season two. Unfortunately, most of us do not live in Nielsen households. Because many viewers feel frustrated when their viewing habits and opinions aren’t considered, we invite you to rate all of the first season episodes of Generation Gap here.

An ABC comedy quiz show, the Generation Gap TV series is hosted by Kelly Ripa. It’s reminiscent of segments seen on Jimmy Kimmel Live! and The Generation Gap game show from 1969. The competition pits two teams against each other. Each team is comprised of a teen or preteen and a senior citizen — typically a grandchild and grandparent. The teams compete in five rounds of generation-specific pop culture challenges and bank money for correct answers. By the end, one team will be victorious and the players get to keep the money they’ve banked. As a bonus, an even younger member of the winning team is invited out for “Toddler’s Choice.” The tot is given the opportunity to choose between an expensive luxurious prize and a more appealing one for a young child.

What do you think? Which season one episodes of the Generation Gap TV series do you rate as wonderful, terrible, or somewhere between? Do you think that Generation Gap should be cancelled or renewed for a second season on ABC? Don’t forget to vote, and share your thoughts, below.

For someone who ad-libs for a living, Kelly Ripa was stiff and unprepared for this hosting job.

The show was awful. I had to force myself to watch the whole thing. Do they screen test the contestants beforehand? The black family, seemed to have only the great aunt who could answer anything. Her nephew kept squinting like he couldn’t see. His guess were not only always wrong, but made no sense. OK, so he didn’t know who Shirly Temple is, but she is most certainly a girl. But this kid guesses her name is “Frank” All his answers were that far off the mark. I felt bad for him. His great Aunt was awesome, but she needed… Read more »

Terrible the questions were not various cultures but only for the white audience. It’s shameful

Even though I have grown to loathe Ripa, I tuned in because the previews showed some cute and funny bits. Oh my! The show couldn’t end soon enough for me. Ripa is beyond annoying with her usual “all about me” personality and giving her dad a job on this show is shameless. Content wise… there is no way any of these preteens could have knowledge of (the majority) of “entertainment history” presented in this show. Some of this stuff dated back to the 1940s!!! This show is referencing stuff from 2 generations back (in many instances). What a lackluster finish… Read more »

Not good. Kelly is annoying, watching cue cards all the time and the age gap is too much, boring, the young ones wont know most answers. Kelly and her little girl voice is annoying. Cancel!

Should be called Racial Gap. This show definitely celebrates White culture and knowledge of it, but is was so kind to include a couple of BIPOC options…. ABC, do better!

Rippas motor mouth, big ego. and irritating and annoying personality ruin what might be a good show Cancel this POS

I didn’t care for this show especially kids didn’t know who Shirley Temple was and alot even seniors didn’t know certain things and I didn’t like toddler choice.at the end of the show. The kids didn’t seem to be not happy especially if they lose . I hope the show gets better but I don’t think so!