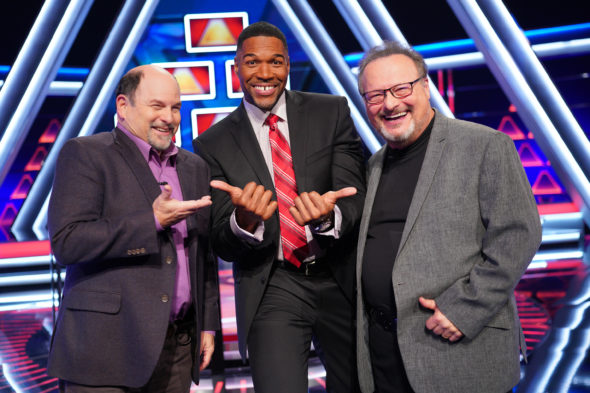 An ABC primetime game show, The $100,000 Pyramid TV series is the latest iteration of a format that launched in daytime in 1973. This newest incarnation is hosted by Michael Strahan. The competition pits two teams of two — a contestant and a celebrity — against one another. In the main game, the partners take turns helping the other guess a series of words or phrases based on descriptions given to them by their teammates. The winning team then moves onto the Winner’s Circle with a pyramid-shaped gameboard. If a team can complete the pyramid’s six categories in 60 seconds, the contestant wins $50,000. If the contestant can win the second round of the main game (teamed with the other celebrity), they can win an additional $100,000. Celebrities appearing in the sixth season include Lindsey Vonn, Russell Peters, Jason Alexander, Wayne Knight, Wiz Khalifa, Ty Dolla $ign, Bobby Moynihan, Ron Funches, Ken Jennings, Ross Mathews, RuPaul, Carson Kressley, Tayshia Adams, Matt James, Wendi McLendon-Covey, and Thomas Lennon.

I have always liked this show. However, since Michael Strahan’s damaging interview with Chris Harrison, from The Bachelor franchise, I know longer care for the host. But I will watch this season anyway, as I like the show itself and the upcoming celebrities. But trying to ignore Michael. And will boo him.