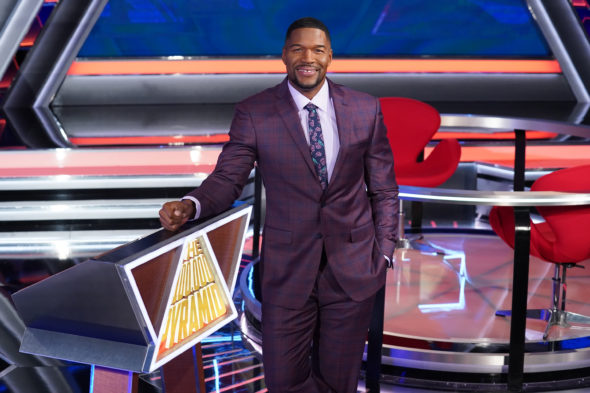 How many different ways can you describe the word “renewal”? Well, ABC has apparently renewed The $100,000 Pyramid series for a sixth season with new episodes to air at some point this summer.

Airing on Wednesday nights last summer, the fifth season of The $100,000 Pyramid averaged a 0.48 rating in the 18-49 demographic and 3.49 million viewers. Compared to season four, that’s down by 30% in the demo and down by 21% in viewership in the live+same day ratings (including DVR playback through 3:00 AM). While these numbers don’t include further delayed or streaming viewing, they are a very good indicator of how a show is performing, especially when compared to others on the same channel.

While ABC hasn’t announced the sixth season renewal, Sony’s casting site for the show has. The “About” page notes, “Season 6 is slated to air Summer 2022.”

Celebrity players and a premiere date for season six are expected to be announced in the coming months.

What do you think? Do you like The $100,000 Pyramid TV series? Are you glad that this game show has been renewed for a sixth season on ABC?

Yes , I like the show …compared to all the other crap shows on , this one is good . I have never seen SO MANY REALITYAND SINGING SHOWS in my life !!!!
Enough already !!!!

Wont be watching. Not allowed to say why.

I use to love this show. But cant stand Michael Strahan anymore ever since his interview with Chris Harrison. So we wont be watching.

Thanks goddess love this game show only even thing else beside The Voice Garage to me. Look forward to seeing it this summer.

Hooray! The Pyramid will still be on ABC! Yes!