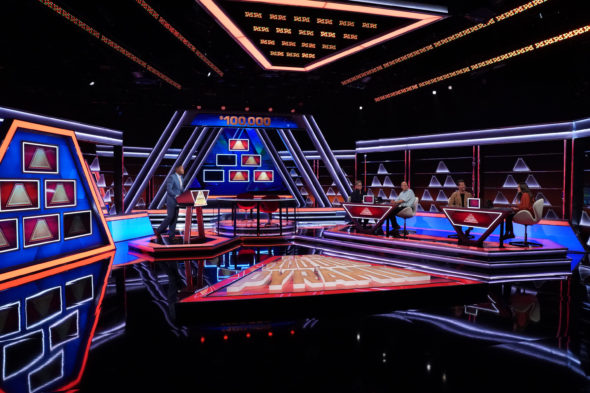 Which celebrities are the best players? Has The $100,000 Pyramid TV show been cancelled or renewed for a sixth season on ABC? The television vulture is watching all the latest cancellation and renewal news, so this page is the place to track the status of The $100,000 Pyramid, season six. Bookmark it, or subscribe for the latest updates. Remember, the television vulture is watching your shows. Are you?

The fifth season of The $100,000 Pyramid averaged a 0.48 rating in the 18-49 demographic and 3.49 million viewers. Compared to season four, that’s down by 30% in the demo and down by 21% in viewership in the live+same day ratings (including DVR playback through 3:00 AM). While these numbers don’t include further delayed or streaming viewing, they are a very good indicator of how a show is performing, especially when compared to others on the same channel. There can be other economic factors involved in a show’s fate, but typically the higher-rated series are renewed and the lower-rated ones are cancelled. Find out how The $100,000 Pyramid stacks up against other ABC TV shows.

Will ABC cancel or renew The $100,000 Pyramid for season six? The show typically does pretty well in the ratings and has become a staple of the network’s game show line-up. I think it will be renewed. I’ll update this page with breaking developments. Subscribe for free alerts on The $100,000 Pyramid cancellation or renewal news.

What do you think? Are you glad that The $100,000 Pyramid TV show has been renewed for a sixth season? How would you feel if ABC had cancelled this TV series, instead?

When is this show going to air? I have been waiting tonight January 16, 2022 on ABC, but it seems there is no live show staring Lance Bass vs. Joey Fatone! I can’t wait to watch this, and I am super excited!

Look forward to 100K Pyramid. A welcome change from the same overdone sitcoms and dramas. Renewing the old game shows is a clever idea for weekday night entertainment. Michael S. is a good choice for a host; he’s likable and genuine.

Great show look forward every Wednesday in the summertime so good game competition.

Yes , this is a great game show and Michael S. Is wonderful host