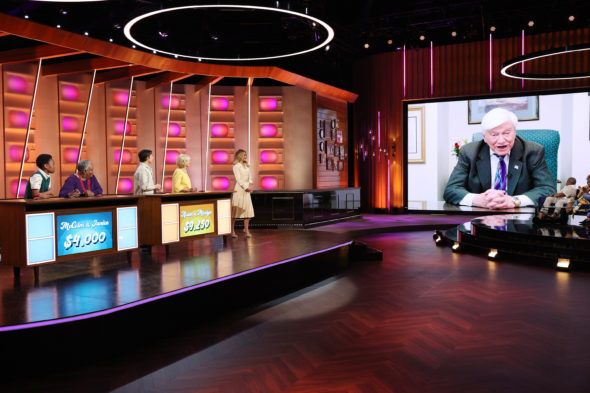 Kelly Ripa has returned to primetime. Has the Generation Gap TV show been cancelled or renewed for a second season on ABC? The television vulture is watching all the latest cancellation and renewal news, so this page is the place to track the status of Generation Gap, season two. Bookmark it, or subscribe for the latest updates. Remember, the television vulture is watching your shows. Are you?

Airing on the ABC television network, the Generation Gap TV series is hosted by Kelly Ripa. It’s reminiscent of segments seen on Jimmy Kimmel Live! and The Generation Gap game show from 1969. The competition pits two teams against each other. Each team is comprised of a teen or preteen and a senior citizen — typically a grandchild and grandparent. The teams compete in five rounds of generation-specific pop culture challenges and bank money for correct answers. By the end, one team will be victorious and the players get to keep the money they’ve banked. As a bonus, an even younger member of the winning team is invited out for “Toddler’s Choice.” The tot is given the opportunity to choose between an expensive luxurious prize and a more appealing one for a young child.

The first season of Generation Gap averages a 0.42 rating in the 18-49 demographic and 3.32 million viewers in the live+same day ratings (including DVR playback through 3:00 AM). While these numbers don’t include further delayed or streaming viewing, they are a very good indicator of how a show is performing, especially when compared to others on the same channel. There can be other economic factors involved in a show’s fate, but typically the higher-rated series are renewed and the lower-rated ones are cancelled. Find out how Generation Gap stacks up against other ABC TV shows.

Will ABC cancel or renew Generation Gap for season two? Game shows have become a staple for the network’s summer schedule. ABC cancelled some of its existing shows in the past few months, making room for new ones. Though the ratings could be stronger, I think that Generation Gap will be sticking around for a second year. I’ll update this page with breaking developments. Subscribe for free alerts on Generation Gap cancellation or renewal news.

What do you think? Do you hope that the Generation Gap TV show will be renewed for a second season? How would you feel if ABC cancelled this TV series, instead?

Generation Gap has to go. How stupid to let a little kid choose a prize after the family worked so hard to win. Stupid game.