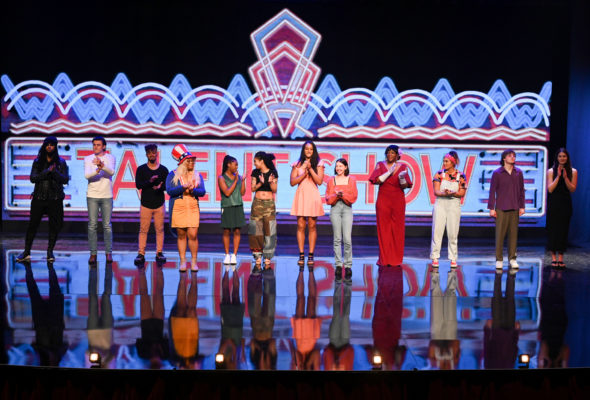 Fame isn’t all its cracked up to be. Has the Claim to Fame TV show been cancelled or renewed for a second season on ABC? The television vulture is watching all the latest cancellation and renewal news, so this page is the place to track the status of Claim to Fame, season two. Bookmark it, or subscribe for the latest updates. Remember, the television vulture is watching your shows. Are you?

Airing on the ABC television network, the Claim to Fame TV series is co-hosted by siblings Kevin and Frankie Jonas. The show looks at people who are on the fringe of celebrity, just out of the spotlight. This series challenges 12 celebrity relatives to step outside their famous family member’s shadow and to live together under one roof. They conceal their identity and lineage in a quest for their own fame and fortune. Over the course of a season, the relatives compete in challenges, form alliances, and play DNA detective in hopes of avoiding elimination. Their goal is to win the coveted $100,000 prize and to stake their own “Claim to Fame”.

The first season of Claim to Fame averages a 0.37 rating in the 18-49 demographic and 1.84 million viewers in the live+same day ratings (including DVR playback through 3:00 AM). While these numbers don’t include further delayed or streaming viewing, they are a very good indicator of how a show is performing, especially when compared to others on the same channel. There can be other economic factors involved in a show’s fate, but typically the higher-rated series are renewed and the lower-rated ones are cancelled. Find out how Claim to Fame stacks up against other ABC TV shows.

Will ABC cancel or renew Claim to Fame for season two? The network is establishing some new competition series this summer and this one seems to be a good companion of The Bachelorette. The ratings could be a lot better but I think it’s got a pretty good chance of being renewed. I’ll update this page with breaking developments. Subscribe for free alerts on Claim to Fame cancellation or renewal news.

What do you think? Do you hope that the Claim to Fame TV show will be renewed for a second season? How would you feel if ABC cancelled this TV series, instead?