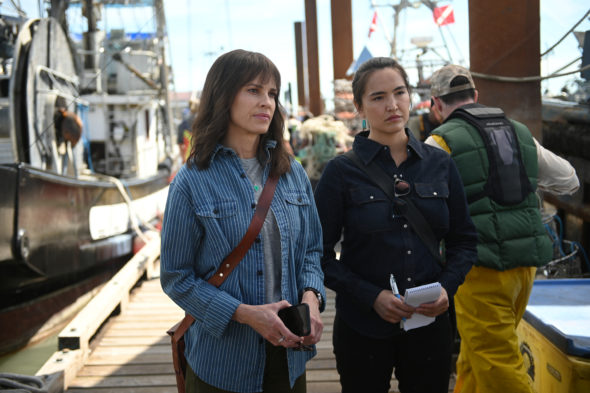 Eileen is looking for more than just redemption in the first season of the Alaska Daily TV show on ABC. As we all know, Nielsen ratings typically play a big role in determining whether a TV show like Alaska Daily is cancelled or renewed for season two. Unfortunately, most of us do not live in Nielsen households. Because many viewers feel frustrated when their viewing habits and opinions aren’t considered, we invite you to rate all of the first season episodes of Alaska Daily here.

An ABC drama series, the Alaska Daily TV show stars Hilary Swank, Jeff Perry, Matt Malloy, Meredith Holzman, Grace Dove, Pablo Castelblanco, Ami Park, and Craig Frank. Eileen Fitzgerald (Swank) is an award-winning investigative journalist and high-powered newspaper reporter in New York. Her reporting methods and abrasive personality are called into question after a high-profile story blows up in her face, and Eileen loses her job. Her former mentor, Stanley Cornik (Perry), approaches her about making a big move, and she goes to work for a struggling downsized Anchorage newspaper, the Daily Alaskan. Grudgingly, Eileen teams up with a young local reporter named Roz Friendly (Dove). Together, they begin investigating the murders of a group of indigenous women. In a new locale, across the country, and in a very different world, Eileen is on a journey to find both personal and professional redemption.

What do you think? Which season one episodes of the Alaska Daily TV series do you rate as wonderful, terrible, or somewhere between? Do you think that Alaska Daily should be cancelled or renewed for a second season on ABC?

I absolutely love this show. It has a wonderful selection of topics that it hits on and really makes you think. The show has steadily gotten better each episode and I hope that it gets renewed for another season. You definitely should not leave it on a cliff hanger.

It is by far one of the best shows on broadcast television. Good writing and excellent cast.
It’s not surprising that the ratings aren’t high. The show makes you think, which is not for the general broadcast tv viewer.
They would rather be watching “Dancing for the people without a functioning brain cell” or other truly mindless drivel

Love the show, yes it should be renewed.

It’s my favorite show now, it must continue
Great show with perfect actors

A very very good show. It is one the favorites for me and my spouse. Hillary Swank leads an excellent cast. And the issue of Missing and Murdered Indigenous Women is huge. We really appreciate the journalistic approach to
the show. It reminds me of the movie Spotlight.

It’s a great show, with all kind of diffrent angle

I hate network TV.. I see it next day on hulu… Don’t discount those viewer’s, there’s a bunch of us out there…

Expand the other reporters roles, and cameo Hillary Swank.. Keep the show its great television

Yes, just gets better and better. Love it!

Show is starting to get better, each episode