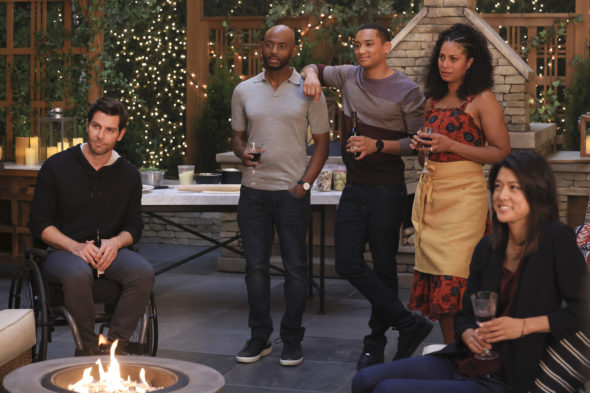 These friends will stay together in the 2022-23 season. A Million Little Things has been renewed for a fifth season on ABC. Word is that it will likely be the show’s final year. The fourth year’s finale airs next Wednesday, May 18th.

An extended family drama series, A Million Little Things stars David Giuntoli, Romany Malco, Allison Miller, Christina Moses, Grace Park, James Roday Rodriguez, Floriana Lima, Tristan Byon, Lizzy Greene, and Chance Hurstfield, with Stephanie Szostak recurring. Set in Boston, this series revolves around a tight-knit group of friends who are each feeling stuck in different aspects of their lives. Their worlds are rocked when one of them unexpectedly takes his own life and this horrific event serves as a wake-up call to the others. In season four, the group comes together once again in aspirational and uplifting ways as they help each other through life’s unpredictable curveballs. Friendship isn’t a big thing — it’s a million little things.

Airing on Wednesday nights, the fourth season of A Million Little Things averages a 0.26 rating in the 18-49 demographic and 1.91 million viewers. Compared to season three, that’s down by 38% in the demo and down by 30% in viewership in the live+same day ratings (including DVR playback through 3:00 AM). It’s a low performer when compared to ABC’s other scripted shows. In the live+7 day ratings (which includes delayed viewing), the series averages a 0.70 demo and 4.10 million viewers.

This one's for you, #Millionaires. #AMillionLittleThings will be back for Season 5! pic.twitter.com/WI8lE1jAgx

What do you think? Do you like watching A Million Little Lies on ABC? Are you looking forward to watching season five?

So happy it’s getting renewed.Enjoy this show very much. It has real life problems and all things going on in the world today.

Yes Good writing and i am glad they kept it

Since I kinda like this show, I thought it was doomed for sure. I’m happy that I was wrong.

I love A Million Little Things! I am so glad it is coming back for another season. It is a realistic show, and it also shows the value of therapy, and how people are there for each other, and how we sometimes fail to be there for each other, because we are fallible humans. In some ways it is a lot like This Is Us, which is my all time favorite show.

The most depressing show ever. New storylines in season 5? They seem to rehash the same plots again and again.

Very happy A Million Little Things has been renewed. Love the show❣️