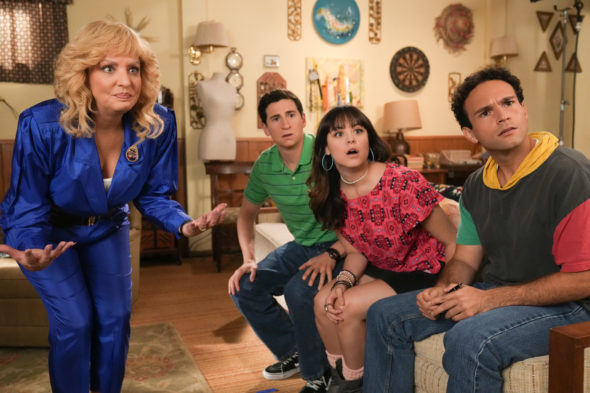 Keep your VCR ready. ABC has renewed The Goldbergs TV show for a 10th season on ABC. which will air as part of the 2022-23 broadcast season.

A family comedy series, The Goldbergs stars Wendi McLendon-Covey, Sean Giambrone, Troy Gentile, Hayley Orrantia, Sam Lerner, and Patton Oswalt (voice). Set in Jenkintown, Pennsylvania, and loosely based on the experiences of series creator Adam F. Goldberg, this comedy looks at life as seen by a young man growing up in the Goldberg family in the 1980s. Youngest child Adam (Giambrone) is obsessed with movies and spends his time documenting his colorful family’s ups and downs. Mother Beverly (McLendon-Covey) loves to take care of her family and meddle in their lives while father Murray (Jeff Garlin) parents from the comfort of his recliner. Eldest child Erica (Orrantia) dreams of being a pop star if she can only overcome her secret love of all things uncool. Meanwhile, middle child Barry (Gentile) can be emotionally clueless and his best friend, Geoff “Madman” Schwartz (Lerner), is engaged to Erica. In the ninth season, the family pays tribute to their beloved Pops (George Segal), Erica and Geoff plan their wedding, Barry is eager for his pre-med future but struggles to let go of the past, and Adam is itching to graduate high school and study filmmaking in college.

The ninth season of The Goldbergs averages a 0.57 rating in the 18-49 demographic and 3.22 million viewers. Compared to season eight, that’s down by 11% in the demo and down by 8% in viewership in the live+same day ratings (including DVR playback through 3:00 AM). It’s the network’s highest-rated comedy.

McLendon-Covey, Giambrone, Gentile, Lerner, and Orrantia have already signed contracts to stay with the series for season 10. Garlin left the show in December.

ABC made the renewal announcement via social media:

Check out our status sheets to track new TV series pickups, renewals, and cancellations. You can find lists of cancelled shows here.
What do you think? Do you like The Goldbergs TV show? Are you glad that this family comedy series has been renewed for a 10th season on ABC?

I do like the show , but I mostly watch the re-runs .

My husband loves this show. But not me. It is soooooo stupid! Just seeing the trailers each week makes me cringe. How it has stayed on the air this long is unbelievable.

You can bet your soul this will be the last season. You can’t do a show about the 80s and have it run longer than 10 years, even if you use the plot device of never exactly saying what year it is (“1980-something”) You mortals of a certain age remember how ridiculous Happy Days was when they started referencing things like The Beatles & the Vietnam war. That’s because it was supposed to be a 50s show, not a 60s show. The Goldbergs already tried a 90s spinoff & it didn’t work very well. This show already lost two major… Read more »

Not so funny having Barry act out of control now that he is out of high school. Every joke, every outrageous reaction, is very predictable at this point.

Great news look forward to seeing it every Wednesday night sitcom comedy. So funny great cast too. Big milestone for this show . The wonder years compare it too such a great classic.