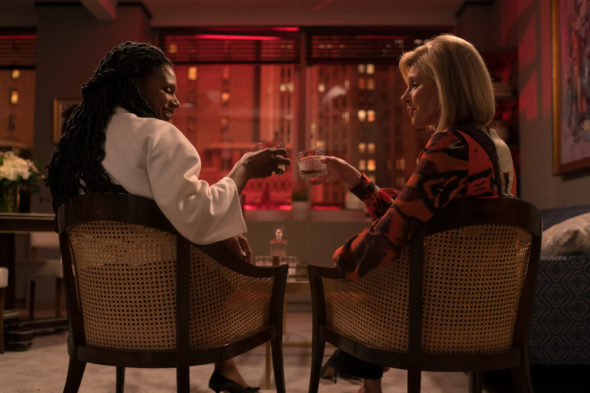 Diane’s worries are far from over in the sixth season of The Good Fight TV show on Paramount+. As we all know, the Nielsen ratings typically play a big role in determining whether a TV show like The Good Fight is cancelled or renewed for season seven (in this case, we know season six is the end). Paramount+ and other streaming platforms, however, collect their own data. If you’ve been watching this TV series, we’d love to know how you feel about the sixth season episodes of The Good Fight here.

A Paramount+ legal drama series, The Good Fight TV show stars Christine Baranski, John Slattery, Sarah Steele, Michael Boatman, Nyambi Nyambi, Charmaine Bingwa, with Audra McDonald and Andre Braugher. Alan Cumming and Carrie Preston guest star. A sequel to The Good Wife, the legal and political drama centers on Diane Lockhart (Baranski), Liz Lawrence (McDonald), and others at one of Chicago’s preeminent law firms. In the sixth season, Diane feels like she’s going crazy, struggling with an uneasy sense of déjà vu, with everything from Roe v. Wade, to voting rights, to Cold War aggressions returning. Meanwhile, the lawyers of Reddick & Associates wonder if the violence that they see all around them points to an impending civil war.

What do you think? Which season six episodes of The Good Fight TV series do you rate as wonderful, terrible, or somewhere between? Are you sorry that The Good Fight won’t have a seventh season on Paramount+?