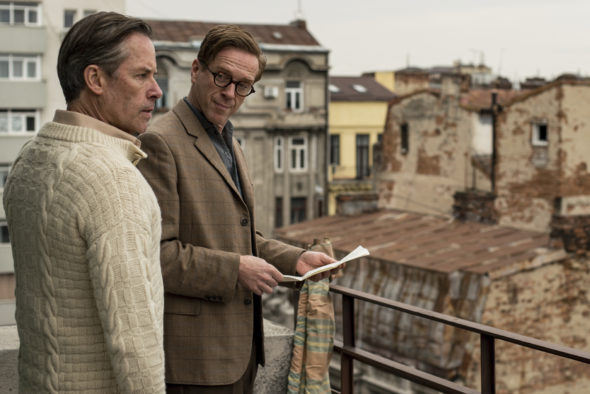 A Spy Among Friends is headed to MGM+ (the soon-to-be rebranded EPIX). The spy drama was originally slated for Spectrum Originals, but that service has exited the scripted business. Six episodes are planned for the limited series, which will arrive in 2023.

Based on the book by Ben Macintyre, the drama stars Damien Lewis and Guy Pearce. It will follow a pair of British spies and lifelong friends as one defects to Russia during the height of the cold war.

[su_su_mgm_plus] revealed more about the series in a press release.

Today, the premium and commercial-free linear channel and streaming service MGM+ announced that it has picked up the scripted crime drama A Spy Among Friends, based on the New York Times best-selling book written by Ben Macintyre. The six-episode limited series dramatizes the true story of two British spies and lifelong friends, Nicholas Elliott and Kim Philby. The latter became the most notorious British defector and Soviet double agent in history. Philby’s deeply personal betrayal, uncovered at the height of the Cold War, resulted in the gutting of British and American intelligence. The series will premiere domestically on MGM+ in 2023. Internationally, A Spy Among Friends was commissioned by ITV for new streaming service ITVX, which will be premiering the series in the UK in December.

“I’m very happy to be bringing our Cold War tale of friendship and betrayal to MGM+. They’re the perfect partners for us and I can’t wait for people to see it,” said Damian Lewis.

“Alex Cary has brilliantly adapted Ben Macintyre’s historical novel about friendship, loyalty, and betrayal. He, along with Nick Murphy, Damian Lewis, and the remarkable cast led by Lewis and Guy Pearce, have brought to life this riveting tale of two British spies whose deep personal bond and long friendship is challenged by duplicity and deception,” said Michael Wright, head of MGM+. “This series is emblematic of our new MGM+ brand and the rich, cinematic, and character-driven stories we aim to tell.”

“Ben Macintyre is an unbelievably talented writer. Alex Cary has taken this fascinating story and created a suspenseful—and at times heartbreaking—drama about duty, honor, and friendship,” added Lauren Stein, EVP, drama development, Sony Pictures Television. “Watching Damian, Guy, and Anna bring it to life is like watching a master class and I am so excited for people to get to experience the show.”

A premiere date and additional details will be announced later.

What do you think? Are you excited to see A Spy Among Friends on MGM+?