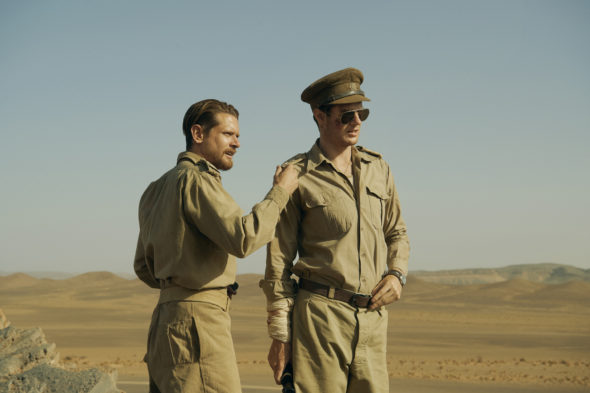 The team is getting back together. The Rogue Heroes TV series has been renewed for a second season by BBC One. The first season is currently airing on Sunday nights on EPIX (soon to be rebranded MGM+) in the United States and concludes on December 18th.

Here’s the second season announcement from BBC One:

The second series will show viewers what comes next for the SAS, following the dramatic turn of events in series one’s final episode

After the roaring success of Rogue Heroes I’m delighted to be embarking on the next chapter of the story. Series two will take the SAS into mainland Europe and will take our heroes to the limits of their endurance. — Steven Knight, SAS Rogue Heroes creator, writer, and executive producer

As series one came to a close on BBC One, its recommission was announced via a specially inserted ‘TO BE CONTINUED’ end caption, as the screen froze on Paddy Mayne (Jack O’Connell) – now in charge of our Rogue Heroes – and the credits rolled. Filming on series two of SAS Rogue Heroes, made for the BBC by Kudos (a Banijay UK company), will take place in 2023.

Based on Ben Macintyre’s best-selling book of the same name, SAS Rogue Heroes on the BBC has been a huge hit with audiences and critics alike, with episode one attracting 9.4 million viewers (28-day all screens figure). This makes SAS Rogue Heroes the BBC’s third biggest drama launch of the year so far. The series has been available in full as a box set on BBC iPlayer since launch.

The second series will show viewers what comes next for the SAS, following the dramatic turn of events in series one’s final episode. Further details will be announced in due course.

The SAS Rogue Heroes cast sit outside crumbling walls with artillery and vehicles
Steven Knight, SAS Rogue Heroes’ creator, writer, and executive producer, says: “After the roaring success of Rogue Heroes I’m delighted to be embarking on the next chapter of the story. Series two will take the SAS into mainland Europe and will take our heroes to the limits of their endurance.”

Karen Wilson, executive producer and Joint Managing Director of Kudos says: “We’ve been blown away by the reaction to the first series and are so pleased to be bringing our SAS Rogue Heroes back for more. Steven’s incredible storytelling has captivated audiences and there is so much more story to tell – I can’t wait for audiences to see what’s in store.”

Lindsay Salt, Director of BBC Drama, says: “The fantastic response and huge iPlayer figures for SAS Rogue Heroes is a testament to Steven Knight’s incredible skill for turning our history into modern, must-see TV. BBC viewers have really taken this series to their hearts, and we’re delighted to be working with Steven and Kudos to bring the Rogue Heroes’ exciting next chapter to life.”

What do you think? Have you enjoyed the first season of Rogue Heroes on EPIX? Are you glad that the series has been renewed for a second season?

Once you get past the first two episodes the SAS Rogue Heroes Series 1 is dynamite and lives up to Ben Macintyre’s standards. SAS Rogue Heroes (or just Rogue Heroes outside the UK) is a must watch for war and espionage aficionados and let’s hope that later transforms into a must read that keeps you glued to your seat. It is hardly surprising that SAS activities in Northern Ireland were a no go area and interesting that Malayan activities were also embargoed. I assume they related to the Malayan Emergency when Field Marshall Templer led the successful incursions against the… Read more »

Hell yeah!
With hunger for first person shooter gaming at an all-time high and wars still raging in other parts of the world.
Why wouldn’t we want to be involved in reviewing the history of one of our elitist regiments?
Some of my family in both world wars and Korea did some of this stuff.
It’s so lovely to see it dramatised for us.
I would like to see a season six announced too!
Just don’t be too quick to bring us up-to-date with the history.
All the more reason to purchase a television licence.

Excellent news! Watched it all in one night. We really enjoyed it.