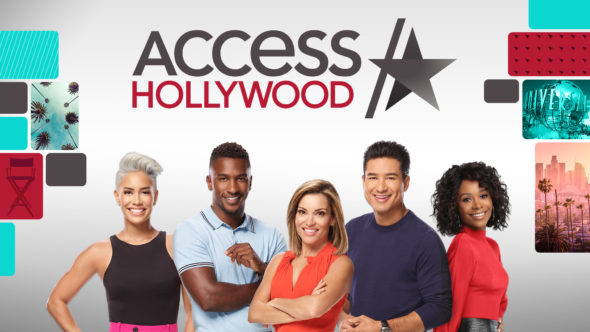 Last month, we reported that the All Access TV series had been cancelled after two seasons and will come to an end in June. Today, NBCUniversal Syndication Studios announced that the original syndicated series, Access Hollywood, and talk show spin-off Access Daily have both been renewed for three seasons and will stay on the air through 2025.

“We are thrilled to continue our successful partnership with the NBC Owned stations, bringing the Access brand to local stations for additional seasons,” said Wilson. “Our talented hosts have incredible chemistry and our dedicated production teams, led by Maureen FitzPatrick, work tirelessly to bring viewers quality content each day on ‘Access Hollywood’ and ‘Access Daily.”

“I am excited for our NBC owned stations to continue to be the home of ‘Access Hollywood’ and “Access Daily’ to deliver our local audiences the latest entertainment and pop culture news,” added Valari Staab, President, NBCUniversal Owned Television Stations.

“I couldn’t be more proud of ‘Access Hollywood’s’ entire team and the quality content they produce every day,” Senior Executive Producer Maureen FitzPatrick said. “After the shut down last March, ‘Access’ was back on the air with original content within a week delivering up-to-date news on Covid-19, heart-warming stories of people serving their communities and how celebrities are giving back. ‘Access’ has been providing viewers with the latest entertainment headlines for 25 seasons and I’m honored to be serving our audience for another three years.”

For the 2020-21 season “Access Hollywood” is averaging over 1.4 million viewers each day ranking it as one of the top entertainment news programs in syndication. “Access Hollywood” continues to deliver for its local station partners including ranking as a top entertainment news programs among the key women 25-54 demographic in three of the top four markets including Los Angeles (KNBC), Chicago (WMAQ), and Philadelphia (WCAU). Access Digital reaches over 4.5 million organic followers and is a leader in short-form entertainment news.

In March 2021, “Access Hollywood” was honored at the annual CultureX Conversation Conference with the award for Program Reflection of Inclusion in Television by Multichannel News and Broadcasting + Cable. The award is in recognition of its diverse hosts and coverage of stories about diversity and inclusion in the television industry. In addition, “Access Hollywood” recently launched its podcast, “The Vault,” which delves into archives of interviews over the past 25 years taking fans back in time to hear what the biggest names in Hollywood had to say in their first interviews, at their first red carpets and along their journey of becoming major Hollywood stars. Hosts Scott Evans and Zuri Hall add their own pop culture perspective to these iconic interviews.

For where to watch: check your local listings

ABOUT “ACCESS HOLLYWOOD”
The 2020-2021 season of “Access Hollywood” marks the 25th year of bringing the biggest Hollywood headlines and celebrity interviews to viewers. Hosted by Mario Lopez, Kit Hoover and Scott Evans, along with correspondents Sibley Scoles and Zuri Hall, the Emmy Award-nominated, daily, half-hour syndicated program delivers the inside scoop on the latest breaking entertainment news. “Access” also delves into the latest true crime headlines with insight from leading experts, celebrates local heroes working to make their communities better, and speaks with the people behind the viral moments everyone is talking about.

ABOUT “ACCESS DAILY”
“Access Daily,” is a daily one-hour syndicated entertainment news talk show hosted by Mario Lopez, Kit Hoover and Scott Evans. Currently in its 11th season, the show features in-studio celebrity guests and breaks down the biggest entertainment, viral and feel-good moments from around the country, keeping viewers up to date on all things pop culture.

ABOUT NBC OWNED TELEVISION STATIONS
NBC Owned Television Stations, part of the NBCUniversal Owned Television Stations division of NBCUniversal, includes 12 local broadcast television stations and a regional news network serving the largest markets in the nation, including New York, Los Angeles, Chicago, Philadelphia, Dallas-Fort Worth, San Francisco Bay Area, Boston, Washington, D.C., Miami-Fort Lauderdale, San Diego and Connecticut, as well as Puerto Rico. The stations produce and broadcast more than 17,000 hours of local news and information programming and enterprise journalism each year that is important and relevant to the communities they serve, delivering it across multiple online, social media and digital out-of-home platforms. The division also operates COZI TV (cozitv.com), a national network that brings viewers some of America’s most beloved and iconic television shows and hit movies, as well as the lifestyle production company, LX.TV, and the in-house marketing and promotions company, NBCUniversal Skycastle.

What do you think? Do you enjoy the Access Hollywood and/or Access Daily TV series? Are you glad to hear that they’ve been renewed?