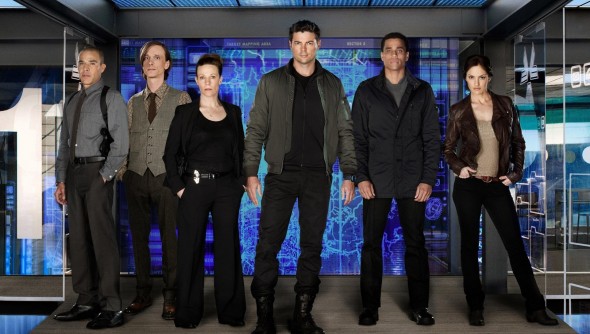 TV show description:
This sci-fi police drama takes place 35 years into the future, in the year 2048. It’s a world in which police officers are partnered with highly evolved human-like androids.

Detective John Kennex (Karl Urban) is a cop who’s survived one of the most catastrophic attacks ever made against the police department. He wakes up after a 17-month coma. He can’t remember much — except that his partner was killed. He’s lost one of his legs and is now outfitted with a highly sophisticated synthetic appendage. He suffers from depression, mental atrophy, trauma-onset OCD, PTSD and the “psychological rejection of his synthetic body part.”

John returns to work at the encouragement of his longtime ally, Captain Sandra Maldonado (Lili Taylor). Every cop must now be paired with a robot and, despite his passionate aversion to androids, John is no exception.

He’s partnered with a battle-ready MX-43 model. He abruptly terminates this pairing after the robot discovers incriminating information about him. As a result, technician Rudy Lom (Mackenzie Crook) introduces John to Dorian (Michael Ealy), a discontinued android with unexpected emotional responses.

Although these responses were deemed flaws, it’s these “flaws” that John relates to Dorian most — John is part-machine and Dorian is part-human. John and Dorian’s understanding of each other not only complements them, it connects them.

As he adjusts to working with his new partner, John also must learn to get along with his new colleagues, like the sharp and insightful human intelligence analyst Detective Valerie Stahl (Minka Kelly) and Detective Richard Paul (Michael Irby), a distrustful man who doesn’t welcome John back with open arms.

Series Finale:
Episode #13 – Straw Man
Kennex and Dorian revisit the past when a string of murders are similar to those committed by a serial killer who was put in jail by Kennex’s father. Dorian gets his first performance review after being reactivated.
First aired: March 3, 2014.

What do you think? Do you like the Almost Human TV series? Do you think it should have been cancelled or renewed for another season?

Please keep it going! The scripts are well written and there’s good chemistry among the players. The new shows on other networks are truly lame- flat – predictable. Almost human raises some of the problems and possibilities we might face in the future. Keep it up!

Why would a detective talk to his Lt. as if she was he was her boss?
I enjoy the program, but Kennex is to disrespectful to his boss.

Keep it! Love it! It’s my favorite fox show!

Renew this show! It’s well written…action packed and VERY well acted! Everyone I tell about this show that watches it..becomes hooked! I think it will catch on if given a few more weeks!

Please keep this show. It is hugely entertaining and I really enjoy, like most viewers, the relationship growth between Urban and Early. Good show and now that Monday night Football is gone it will grow with the male viewers. If Fox decides to cancel then maybe SyFy would be interested.

I was very underwhelmed by the prospect of this show, whose premise reminded me very much of the short lived Total Recall 2070 from 1999. However during the winter break I needed to watch something so thought what the hell. I’m still a little “meh” about the show overall, but Urban and Ealy have got to be 2 of the most charismatic leading men on TV, they carry the show effortlessly. The supporting cast have promise but are under utilised – Mackenzie Crook is a treat as a super geek, Michael Irby plays an SOB as well as almost any… Read more »

Keep it…it will catch on,there wasnt much advertisment in our area I almost didnt know it was on but facebook ad’s are growing and the show itself is awesome, even more of the people I recomend it to say they started watching it every week.

I would definitely like to see this show continue. The stories are good, and I like the chemistry between Kennex and Dorian. I’m a little surprised to see it on so early in the evening, with all the sex and violence. Not that it bothers me, but I don’t think it’s a good show for younger kids who may still be up at that hour.

Renew please! I don’t watch TV shows at all, I either watch news or sports. I will not only watch this one every week, but I record it every week.

As a person who is mostly housebound due to an accident, this show is most certainly the highlight of my Mondays. If it was on more than once a week, I would be watching it every time it was on. Its not that I am addicted to tv, I’m not. There are only two shows I watch all week and this is one of them. I think it’s because the scripts are so well written, the content is diverse and exploratory and the actors, all of them, do a phenomenal job. It is my most sincere hope that FOX will… Read more »

I hope that “Almost Human” gets renewed. I love the dynamic between Kennex & Dorian. The acting is really good and you can see that Dorian while sometimes being almost computer like, also has such a human side to him that it overshadows the bot side. I think the episodes have been interesting and that the dynamic between Kennex and Dorian is developing and that Kennex trusts Dorian more than even some humans. It is also a nice lead in to “Sleepy Hollow” so I hope that they keep that Monday line up complete. I think there is a comedic… Read more »

Surprise, Surprise! So far this is a hit. Early really plays the part of a robot. Nice to see a few familiar faces (The Unit). So far so good. They killed Carter off Person of Interest, so I needed a new show to watch;Those ********!