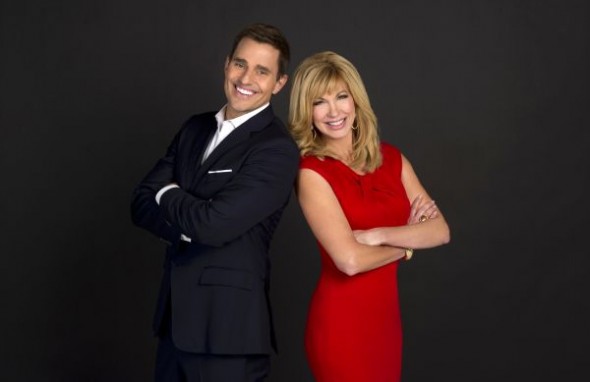 America Now is ending after four seasons on the air. The syndicated lifestyle program which is hosted by Leeza Gibbons and Bill Rancic has been cancelled.

Raycom Media, which produces the daily show (via ITV Studios America) and covers all of its production costs, confirmed the cancellation.

“America Now is a show we are extremely proud of,” said Paul McTear, president and CEO of Raycom Media. “We love Leeza, Bill, the content and the fact that it’s family friendly and advertiser friendly. But it failed to measure up, from a business-model standpoint.”

Combining original content with segments from local stations, the show premiered as a one-hour show back on October 30, 2010. In September 2011, it was downsized to a half-hour daily show but two episodes often aired back-to-back.

It’s unclear when the show will actually end but its expected to finish out the current season.

What do you think? Did you enjoy watching America Now? Are you sorry to hear that it’s been cancelled?

I loved watching America Now. When I couldn’t find it I just thought my local stations moved it around, like they do with many shows the beginning of September. Very disappointed that it’s been cancelled.

Didn’t realize it was gone. Always seemed to promise more than it delivered. Nothing against the hosts, but the show was lightweight with only occasional interesting bits.

I am very sad that America Now has been cancelled. It was very informative. Bill and Leeza were very decent and considerate towards their audience. It was a relief to watch them, compared to other programs that are geared towards the “shock” value. I hope they have something else in the works.

LEEZA, PLEASE GIVE AN UPDATE ON DOREEN’S SON, J.G.!!! ANYTHING NEW?

HIGHLY SENSITIVE!!! DO NOT PRINT, FORWARD TO LEEZA!!!!

I, too was a faithful viewer, and agree that the show was very informative, and I learned a lot! So sorry you were cancelled! There’s no accounting for taste or intelligence!!! Look forward to your next “ASSIGNMENTS”! Best of Life to you both!

Sorry that this show was canceled, as it was a good and informative show.
Its sad that TV has all of these talk shows on they have to cancel the one show that i informative and also entertaing. Its gotten to where I jut turn off the TV after the news until evening.

I enjoyed the show sorry it ended

So glad this POS show got cancelled. No more dumbing down of the masses!

I really loved this show and the hosts.

I like the real base facts on most items. They are not objection on far off science as they did a one way side on climate change. Not given the opposite site of the science. of there is no climate change. Other scientists who don’t agree and have found the scientists.who have supported climate change has fake there data. America Now has losses serious creditably. ANY SHOW THAT HAS LIBERTY BIAS WILL FAIL. LOOK AT MSNBC (WHO WATCHES IT. ONLY PEPOPLE WHO DONT LOOK AT THE FACTS OR THE OTHER SIDE.) Look at all the luberial radio shows that don’t… Read more »

Why was it cancelled!? It had a lot of interesting topics, bring it back. A petition should be started. Who’s with me? mimislifelessons.blogspot.com

Mimi, I agree that a petition would be a good idea. I couldn’t see where to add my name at BlogSpot, though.

I looked forward to watching the show and was sad when I couldn’t find it at its usual time. Bill Rancic and Leeza Gibbons covered interesting and relevant topics.

I loved that show. I had told EVERYBODY about it. My girlfriends in Chas., SC and Savannah and at Pawleys Is. loved it too, but now that we’re hooked, it’s gone! I learned something on that show that saved my life and learned a lot of great tips too. Too bad the good shows don’t make it, but the slutpuppypornos and vulgar, redneck “reality”(?) programs seem to have no problem. A big loss for intelligent viewers.

I can’t believe the show is gone. I enjoyed the information it provided and the tips that were really helpful, including the product tests. It was certainly a rose among the manure
that passes for programming nowadays.

I am so very disappointed that this show is cancelled. I love the show it is very informative and has wonderful tips. Please bring it back. I watch it faithfully.