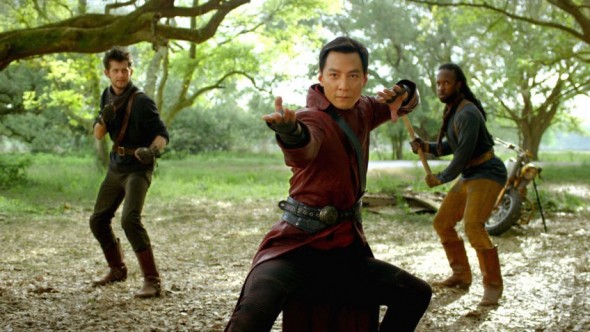 A second season of Into the Badlands is looking more likely. At the TCA winter press tour this past weekend, The Hollywood Reporter’s Lesley Goldberg tweeted that the martial arts drama would be renewed for a second season.

Into the Badlands freshman season premiered on November 15th, 2015.

A second season renewal seems likely. The first season did well in the ratings, with an 18-49 demo average of 1.79 and an average of 3.86 million viewers per episode.

What do you think? Are you a fan of Into the Badlands? Would you like a second season?

The Badlands is the best, most intense new series I’ve seen in years! The martial art fighting scenes are better that most Hollywood movies. The concept of a world with motorcycles, cars, and machinery, but void of guns is an original idea that gives this show a old world feel with a modern twist. I can wait to see the next season.

Naturally!! Awesome show.. and base on Journey to the West, couldn’t be better!

Love Into the Badlands. Am glad there is another season. Hoping to see Sunny and Veil’s back story, how they fell for each other.

when does season 2 start! Awesome!!

I love! When does season 2 start

please i do appreciate and love, but when is ”season 2”.

Yes, second season for sure. First season was amazing, I could not stop watching.

AMC keeps us waiting, but at least some news is better than no news. Let’s hope for at least 15 episodes. That should give plenty of time to answer most of the questions that a lot of us want answered.

I look forward to a second season.

Well ! No kidding, there better be a 2nd season for this very good show. The AMC network has had some pretty good shows, this is just another one of them … I see a few more seasons for this one. My opinion, thanks …