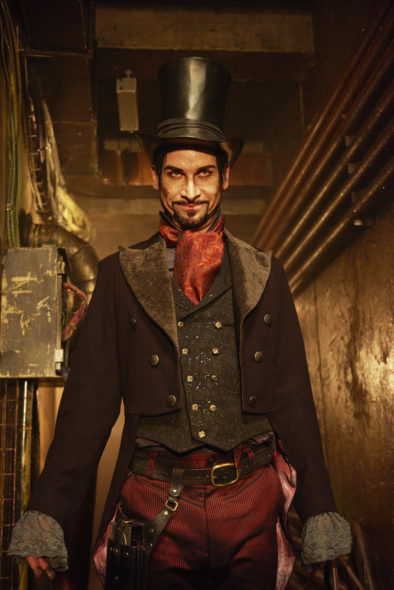 Posted on September 6, 2017 by dalmatianjaws

Unfortunately, your suspicions are correct. Syfy has canceled Blood Drive after one season.

If this news makes you angry or sad, you’re not alone.

I found out not too long ago, but have been trying to think of a way to tell you guys since I felt it was up to me to let the fans know.

Ultimately I decided to wait until after the final episode aired so the news did not taint your experience. It simply didn’t seem right to burst the bubble so early, especially with how the last episode plays out. We always planned for a season two, but now that the future of the show is uncertain the final scenes seem so much more … final.

If I never get the chance to tell my version of what comes next, I’ll be incredibly sad.

But the good news is, then you can make up your own. The story is yours now, it always was from the first moment it was broadcast. If you love it, take it and play with it in your own imagination.

The future is not set, in our world or the world of Blood Drive.

As to the reasons why the show is cancelled, I’m not privy to all the details. Obviously the ratings were low, but it was also a very noisy show on social media (thanks to you guys!) and a very well-reviewed show with critics as well.

This I do know: despite canceling us, Syfy was the only network with the steel to make the show in the first place.

Blood Drive: A Look at the Ratings

The first season of Blood Drive averaged a 0.14 rating in the 18-49 demographic and 465,000 viewers. Among the 13 Syfy TV shows. we’ve been tracking of late, Blood Drive ranked 10th in terms of its demo numbers and 11th in terms of total audience size, so the cancellation is not a huge surprise.

What do you think? Did you catch season one of the Blood Drive TV series? Did you expect it to be cancelled or renewed for a second season on Syfy? Let us know, below.

Personally – Cancelling Blood Drive is typical of the 5th grade thinking of Network Execs, as most of the Sitcoms and Brain dead garbage they keep on the TV is written for 5 year old’s in adult disguise.

Blood Drive was fresh and exciting ! Best new show in a long time.

Yea an. All the good shows get cancelled. I’m about to give up on cable all together. Every good show gets cancelled because of ratings. Ratings will not be as good as they used to be now, not with all the Thousands of channels and all the streaming networks. All I know is if they keep not keeping shows, the. Soon cable will be obsolete. They best learn how to be happy with the ratings and keep the good shows on. Because viewer ratings will grow. Even Netflix doesn’t keep the good ones going a lot. That is why I… Read more »

I am very disappointed. Loved this show. I need some Slink in my life.
Do season 2!!!!