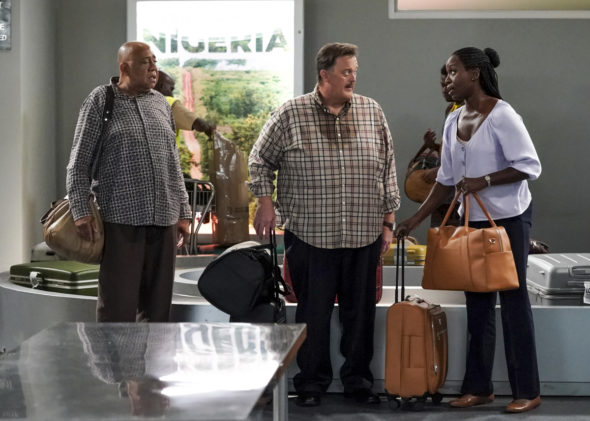 How will their relationship change in the third season of the Bob ♥ Abishola TV show on CBS? As we all know, the Nielsen ratings typically play a big role in determining whether a series like Bob ♥ Abishola is cancelled or renewed for season four. Unfortunately, most of us do not live in Nielsen households. Because many viewers feel frustrated when their viewing habits and opinions aren’t considered, we invite you to rate all of the third season episodes of Bob ♥ Abishola here.  *Status Update Below.

A CBS A romantic comedy series, Bob ♥ Abishola (read as “Bob Hearts Abishola”) stars Billy Gardell, Folake Olowofoyeku, Christine Ebersole, Matt Jones, Maribeth Monroe, Vernee Watson, Shola Adewusi, Barry Shabaka Henley, Travis Wolfe Jr, Gina Yashere, Bayo Akinfemi, and Anthony Okungbowa. As the story begins, Bob (Gardell) is the owner of a very successful compression sock factory in Detroit and runs the business with his mother (Ebersole), his sister (Monroe), and his younger brother (Jones). The stress of the job lands Bob in the hospital with a heart attack and he falls in love with his cardiac nurse, Abishola (Olowofoyeku), an immigrant from Nigeria. She came to America with her young son (Wolf Jr.) and they live with her Auntie Olu (Adewusi) and Uncle Tunde (Henley). Despite their very different backgrounds and her initial lack of interest, Bob is determined to win Abishola’s heart.

What do you think? Which season three episodes of the Bob ♥ Abishola TV series do you rate as wonderful, terrible, or somewhere between? Do you think that Bob ♥ Abishola should be cancelled or renewed for a fourth season on CBS? Don’t forget to vote, and share your thoughts, below.

I have been trying to send a comment for a few months and could not get through but now I’m in so first, from commercial I knew I was going to love I ❤️ Abishola and never missed a episode but now it’s all about talking over the man of the house he can’t say nothing and it’s all Africa and the mother in law running the house and I’m black. It’s not funny anymore and now if I miss it I’m good it’s not funny anymore it’s like what you did to get us is what you have to… Read more »

Yes . Please renew . There are still more funny stories you can write for these characters.besides what else can be put on , more crime , medical and violence shows?

This show is ground breaking with dealing with difficult social matters that are happening in the world today. The comedy of it all in how we can laugh at ourselves is ok, with cultural differences.

Yes no unbelievably terrible. The loud tracks are so much that I can’t even hear the actors especially the ones that have accents. Chuck Lorre is running out of steam he’s making too much stuff to soon there is now cookie-cutter type of themes. Making fun of people in various forms is not my idea of comedy. It’s just a little way of trying to make people laugh without really having any real talent to do it. I understand people have nothing while the virus is attacking the world. But if this was a normal time the show would not… Read more »

Bob & Abishola is such a great break from all the shooting and killing shows. They have a great great cast, and it is wonderful to see a black and white show built on love not hate.

I like this show however I still after 3 years of watching it do not find the pairing of Bob & Abishola believable. I entire Wheeler family is very annoying to watch. I believe the show would be a lot better and funnier if it were just Abishola, her family and friends/ co-workers! They are the funny ones. Do a dream episode where she dreamed the last 2 Seasons. Get rid of the Wheelers and rename the show “Abishola “

How about just cancel that’s even better

I watch the show and really like it, but must admit I feel no chemistry between the leads. I really like Billy Gardell, so am not willing to get rid of the Wheeler family, but the show is flawed.

This show keeps getting better and better, wasn’t sure how they were going to get this work, but some how they did. It’s “must watch TV” for me.