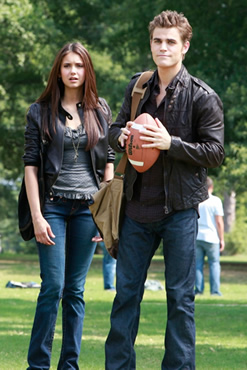 I love TV so I give alot of shows a chance and if it isnt appealing, I give it up forever. So Life Unexpected being dropped was like seeing the title for the Season Finale being changed to “Cancellation Unexpected” or “Series Unrenewed”. I watch some of the other shows, but none as faithfully as Supernatural and Nikita. I followed Supernatural, OTH, and Smallville to the CW after the fall of the WB. Now I’m getting into Hellcats…Heather Hemmens is the baddest chick on the show…I’ll rant about that later. I read the books so I don’t watch/like Vampire Diaries… Read more »

i am so bummed about all these shows. I loved life unexpected and seeker, and i love supernatural… i won’t have anything to watch on tv..please bring vampire diaries back, i love that show the most…..

The CW has some good shows, I hope Nikita,supernatural,vampire diaries, and one tree hill all return next season. maybe even 90210, I like 90210 it is underated.

We can’t believe Life Unexpected got axed and the line up of junk shows continues ie Shedding for the Wedding. Life was a show that opened many areas of conversation about life issues and showed that adults also make mistakes but you work thru them. It was hard to find due to other shows bumping it, but always worth the effort. My daughter and I are really upset about losing another great ‘watch together’ show.

I want One Tree Hill to stay for another two to three seasons more. I’ve been watching One Tree Hill since I was a sophmore in high school. If One Tree Hill gets cancelled I would be very sad and mad at the same time.

I really love Hellcats and Vampire Diaries too!

I’m really really sad about Smallville finale season , It was a awesome show!

You would think being the lowest networks out there you would want to keep as many fans as possible but yet you continue to get rid of shows that people like. Yeah it’s not 12 million viewers but lets get real your a small network. Shows like Legend of the Seeker, The Vampire Diaries, Supernatural, Nikita are all great shows, you need to keep them alive!

“Shedding For The Wedding” appears to be total garbage, should never air. I hope they renew Nikita & Supernatural. They should cancel “The Dawn Ostroff Show.” It’s been nothing but disaster for the CW.

they cancelled Legend of the seeker..YOU STUPID PEOPLE Who is running CW a bunch of high school girls!!!! grrr!!

Re-new Nikita and Supernatural then go back in time and stop the cancelation of Legend of the Seeker. Everything else on the network is for girls only.

I watch those and I’m a girl. I do NOT watch the “girl” shows at all!

I second that. And Supernatural!

Why is “America’s Got Talent” on the CW list? I’m fairly certain it is still on NBC. Did I miss a memo?

@Bill Wilson: Lol. Nope. That info belongs to America’s Next Top Model. Thanks for pointing that out.