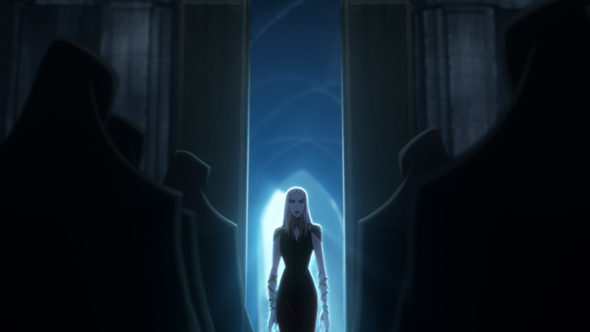 Castlevania is ending its run. Netflix has announced that the upcoming fourth season will be its last and the final episodes will be released on  May 13th.

A dark medieval fantasy animated series which is based on a video game by Konami, Castlevania follows the last surviving member of the disgraced Belmont clan, Trevor (Richard Armitage), who’s trying to save Eastern Europe from extinction at the hand of Vlad Dracula Tepes (Graham McTavish). He and his misfit comrades race to find a way to save humanity from extinction at the hands of the grief-maddened Dracula and his sinister vampire war council. James Callis, Emily Swallow, Matt Frewer, Tony Amendola, and Alejandra Reynoso also star.

Viewers might see more from the world of Castlevania at a later date, however. Per Deadline, Netflix is looking at developing a spin-off series set in the same world. The new series would likely focus on a different set of characters.

Check out the posts about the return on Castlevania below.

This is where it all started. The final season of Castlevania arrives May 13. pic.twitter.com/sLqWjJxjoA

What do you think? Are you sad to see Castlevania end? Do you plan to watch the final season on Netflix? Would you watch another series set in the same world?

I’m wondering if they could continue with Trevor and Cypher’s child. The new Belmont. Trained in magic and with the Belmont bloodline, not to mention growing up with Alucard would make for an intriguing character

Wow I really enjoyed the series was hoping for season 5. I will also watch the spin off

There is plenty of lore to explore. I hope they go back to where the story starts with Leon Belmont and how Dracula became….well, Dracula. Would’ve for an excellent season.

Could also continue with Issac and Hector.

Yes!!! I was thinking the same thing.. would be a great little flash back series. Weird how they focused on his picture twice in the Belmont hold but never went into depth.

I think it raises encountered feelings, at least in my case, the abrupt end of the series as we know it for I’m sure many would have loved to continue exploring the Shakespearean personal drama of it’s fantastic characters however God willing a spin off might be even more welcomed than the series if it exploited what hardcore fans demanded because they are the real loyal followers of the show.

Too bad. Not that much a fan of Anime-type series anymore. However, there are a few good ones and CastleVania belongs with those.

With every season I saw the quality of screen-writing improve, making the story much richer than the first season implied. Of course, a series should not linger and given a proper ending. Still, I would have liked to see one or two more seasons.