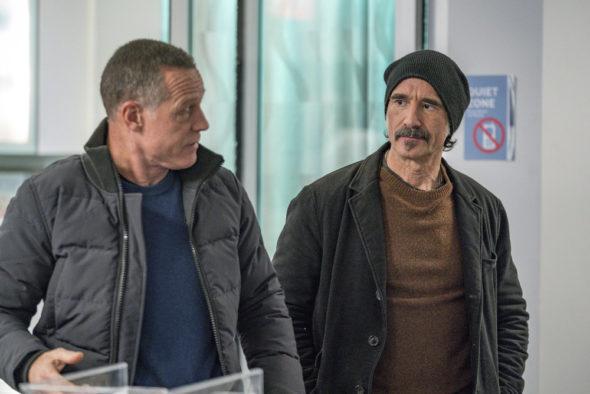 Fans of Chicago PD will soon be able to see the popular series on more than just its home network.

FOX has picked up the NBC television series for syndication starting in Fall 2018. More was revealed about the deal in a press release. Check that out below.

The hit, one-hour dramatic television series is Dick Wolf’s second installment in the Chicago franchise. Chicago P.D. is a riveting police drama about the men and women of the Chicago Police Department’s elite Intelligence Unit. The Intelligence Unit combats the city’s most heinous offenses: organized crime, drug trafficking, high-profile murders and beyond.

“We are thrilled to bring another Dick Wolf hit to the broadcast marketplace,” said O’Boyle. “Chicago P.D is a premiere procedural and is a unique opportunity for local broadcasters, as it is the only off-net scripted hour available to play as a Monday-Friday strip. This series will strengthen our partner stations’ programming schedules the same way the ‘Law & Order’ franchise has done over the years.”

Are you a fan of Chicago PD? Will you watch it on FOX? Tell us what you think.

I will most definitely watch all the Chicago PD shows in syndication! I have been watching them on other cable stations (Oxygen,USA,TNT)!I luv Chicago PD shows & I have seen all of them.Bring it!!❤❤❤

No matter where it is I will watch all the Chicago series.

Absolutely love the characters and the storylines.

Chicago PD is a really good shop,I will be looking forward to see these shows and seeing episodes when the character if Al will be shown.i will miss him in the new season.

Once I started watching it I was hooked. Great cast and superb story lines. It leaped to my favorite TV show..giving a nod to Sophia Bush and others. Looking forward to many more episodes.

Love the Chicago P. D. But you keep killing off everyone. hell people can’t even come back to visit I’d be bitter too kill my whole family is be a pissed off cop or pissed off civilian.

CPD is my husband’s favorite show. he does not want anyone to bother him when he’s watching CPD.
I also like & watch it.
Please don’t cancel CPD. also I watch all the Chicago shows. also I love when they have the cross overs when all 3 are in involved.

Yes always. And all the Chicago shows.

can’t watch now w/o Erin&Jay- so sad,heartbreaking,makes me cry seeing their pictures&songs-I will not watch a tempermental-sexual harasser remain knowing he is reason for Sophia Bush leaving&chose to keep him instead of FIRING him. His coaching is going to require a med/meds to calm the chemicals to his brain-If he forgets one day, there is trouble. This is like a recovering alcoholic, do you really think they go the rest of their life w/o drinking? It’s called a “slip”. Sexual Harassment epidsode is disrespectable/such a disgrace to Sophia Bush, how can you sleep at night? Keep up the # of… Read more »

I love all the Chicago shows, so I’m very glad to hear it.

I am just glad they realize its a hit and we love the show!! The characters have so many layers to who they really are and all the actors are fantastic!!!

I really like the show. How could you not fall in love with Halstead,Ruzek and Olinsky? They are portrayed as “real men”, the kind of men women and men can look up to. I enjoy the different ages and stories that create each character.

Even now we can “smell” the transaction between FOX and DISNEY. Fox will air a lot more reruns and realities then scripted TV. In the coming months we will see some heavy cancellations, to my regret

I love that show…I could watch it forever….I am so happy for it being on other than the other channel…more to watch…than you