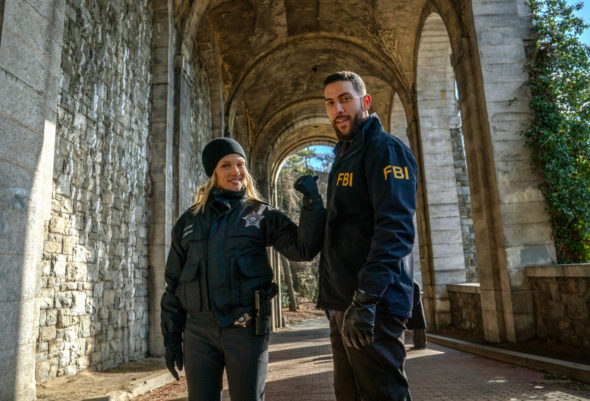 A fan favorite from NBC’s Chicago franchise is headed to CBS to appear on FBI. The big crossover event was set up during Wednesday night’s episode of Chicago PD. Per Deadline, Tracy Spiridakos, the actress behind Hailey Upton, will head to New York to work with the FBI bureau there.

A photo of the actress popped up on social media. Fans will see her appear on next Tuesday night’s episode of FBI. Wolf said the following about Spiridakos’ appearance on the series:

“Tracy’s character is a fan favorite, and I’m extraordinarily happy to be shining an even greater light on her and gaining new fans along the way before she returns to Chicago PD.”

Crossovers between Dick Wolf shows are not unheard of. Chicago PD has had a crossover with Law & Order: SVU and the Chicago series have had numerous crossovers. This will, however, be the first a crossover event between networks in the Dick Wolf family. The DC family did it in the past when Supergirl still aired on CBS.

What do you think? Will you watch the crossover on FBI next week?

I’d follow Dick any where he went. Great producing, great writing, great acting. Hailey is a winner. She will add a lot to FBI. What happens to Zmaggie?

FBI is one of my favorite shows right now…and I like the Chicago shows. So, of course I will watch!!!@

I can’t stand Upton. Too bossy.

I am thrilled to hear that Tracey is moving to FBI. I was very disappointed that Missy left. I thought she was great. Also have been a fan of Jeremy Sisto for years, so that would have
brought me back but now that I hear Tracey is switching over , I know she will be a terrific asset to the show. You can always count on Dick Wolf to make the right decision! I have been watching his genius forever, since the first Law & Order.

I think the girl from Chicago PD is a natural and will add to FBI at CBS. I hope this does not mean Maggie of FBI IS OUT. She is best show has.

I definitely will watch. I love the show. I hate it when some of my favorites leave though.

I don’t understand why they have to take someone from another show when they have other girls on that show(FBI) that they can move into that position to fill for the time being. I don’t like losing Hailey on Chicago PD.

Absolutely will watch the crossover!!! Love Chicago PD Fire and Med. love FBI and FBI Most Wanted. Great writing!!! The characters are winderful!!!

Yes I will watch it! I love Chicago PD. Yes I would follow any of those characters!

Never watched FBI before may watch this week.
I know this is an old story but, I can’t see Erin from Chicago Pd, playing any other character but a Cop.

Peggy Sherratt
Reply to  B. Johns

FBI is the best!!! You will love it