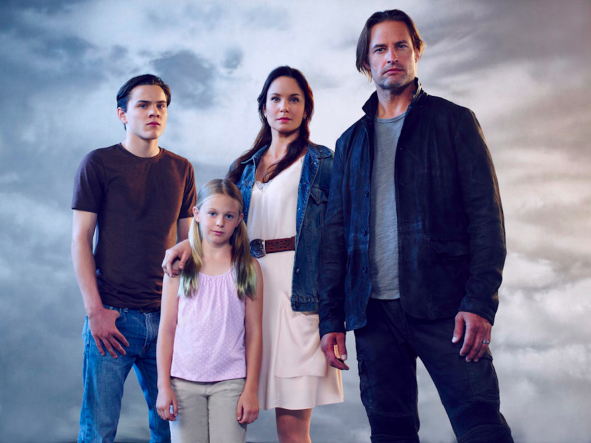 TV show description:
This science fiction drama takes place in the near-future, on an Earth where citizens are under military occupation by an organization known as the Colony Transitional Authority. It’s part of a large invading force of extraterrestrial origin. The unseen aliens are referred to as the Hosts and the Raps (a reference to the fierce raptor birds).

Major cities in this world are in ruin and are now surrounded by incredibly thick walls that are hundreds of feet high. Before the occupation, former US Army Ranger and FBI Special Agent Will Bowman (Josh Holloway) and his wife Katie (Sarah Wayne Callies) lived in Los Angeles with their sons Bram (Alex Neustaedter) and Charlie, and young daughter Gracie (Isabella Crovetti-Cramp).

During the invasion, the family was separated from Charlie. When the series opens in L.A., a year later, Will and Katie are fighting to find him. Having gone undercover, Will is eventually captured and identified. Los Angeles Governor Snyder (Peter Jacobson), an elite proxy with the occupational government, offers Will a chance to get his son back — if he and his family will collaborate with the occupational government.

Snyder won’t take “no” for an answer so Will and Katie find themselves faced with the toughest decision of their lives.

Series Finale:
Episode #36 — What Goes Around
Will must make a sacrifice to protect his family. Katie races to save the refugees outside Seattle’s walls. Snyder struggles to control a Colony amidst the chaos of war. Bram and Gracie make a big decision.
First aired: July 25, 2018.
What do you think? Did you like the Colony TV show? Should USA Network have cancelled or renewed Colony for season four?

Love, love, love this series. Very disappointed to learn that it has been canceled. Please reconsider your decision!!!

Just found this series on Netflix and loved it. There really needs to be at least one more season or two for closure, it really left me hanging as to everyone’s fate. Maybe Netflix could pick it up and finish the story.

WAY TO KILL BRAND LOYAL TO CHANNEL, EVERY SHOW DOESN’T HAVE MECH TO SELL TO BE HIT WITH THE FANS. YOU KILL SHOW NOT BECAUSE IS NOT HIT, ITS BECAUSE YOU CAN’T SELL T-SHIRT, CAPS, TOYS TO WATCHERS OF THAT SHOW. IF ITS COME DOWN TO PAYING LIGHT BILL OR PUTTING FOOD ON TABLE WE ARE GOING TO THAT, BEFORE WE BUY T-SHIRT OF OUR FAVORITE SHOW. SO IF SHOW CAN’T PULLIN COUPLE MILLIONS DOLLAR OFF T-SHIRT ,TOYS, CAPS, COMPLETE SEASON 1 N 2. THAN SHOW NOT HIT., MEANWHILE YOU WILL LOSE TENS TO HUNDREDS OF MILLION IN ADVERISTMENT FOR… Read more »

Renew. The series should not have been canceled on its continued rise in rating. That’s just stupid

Oh no…love this series. Please renew for another season!!

This was a great show and so disappointed it was cancelled without us knowing the ending. Like many shows the network cancelled this without thinking of what the fans liked and wanted to see more of. At least a few episode season to end it properly

Soo disappointed to learn season four of colony cancelled..such a great show..what a shame and to be left with such a cliffhanger..this was one of my favorite shows..such a disappointment.

I was excited to find this show on Netflix a few years ago. Disappointed, I read it may be cancelled! It is so sad followers of this series will never know where the writers would take the show and how it finally ends. Please keep this tv show to it’s end! I hate to be kept hanging. Too many shows end this way!

Definitely should NOT have cancelled! I hope Netflix picks this show up too.

Really wish this had not been cancelled. There is much more to answer and Had we known this would be the end, not sure if would have watched at all

I really liked it. I wished it hadn’t been cancelled. There’s so many more stories to be told.

This was a heart-breaker cancelling this show so early. This show was starting to show the alien enemies and was getting good. I do think the show was taking a while to get to the point to which I believed killed the show but It was getting there and that should been good enough to keep the show going. The show needed a little more time or at least put it on netflix or SYFY(Even though I don’t know what SYFY is anymore). BUMMER BUMMER BUMMER

I wish it hadn’t been cancelled – I loved that show. It seems most science fiction shows get cancelled too soon.

Should not of been canceled. I thought it was a great show