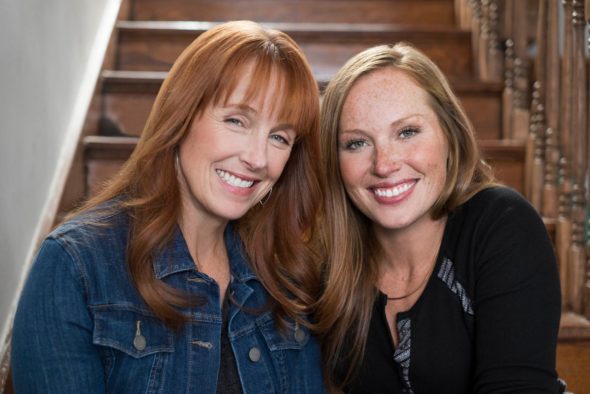 Good Bones is returning to HGTV for its seventh season, and there is more ahead for fans of the series. A new spin-off, Good Bones: Risky Business, is also headed to Discovery+. Both shows will feature mother-daughter renovators Mina Starsiak Hawk and Karen E Laine.

HGTV revealed more about the renewal and the new spin-off in a press release.

“With the current season of Good Bones featuring mother-daughter renovation dynamos Mina Starsiak Hawk and Karen E Laine delivering 12 million viewers since its June 29 premiere, HGTV signed the production deal for another 13-episode order slated for premiere in summer 2022. The series will continue to follow Mina, a real estate agent and mother of two, and her mom, Karen, a lawyer, as they buy more dilapidated properties in their hometown of Indianapolis. During each episode, the pair will demo the houses down to the studs and renovate them into dazzling family homes – all while offering a glimpse into their personal lives.

“The great thing about signing off on a mid-season pick up is that we know we’ve got a good thing, a proven performer,” said Jane Latman, president, HGTV. “Mina and Karen have captivating personal lives, but they are also incredibly talented and creative when it comes to renovation and the camera loves them. It’s no wonder they continue to attract new fans season after season.”

Given her on-air success, Mina now will take on the biggest renovation challenge of her career in the new Discovery+ series, Good Bones: Risky Business. Available to stream in summer 2022, the six-episode series will feature Mina going solo to purchase the historic Sanders House in the Indianapolis neighborhood of Fountain Square. More than a century old, the 6,000 square-foot property – which includes the main home and a carriage house – will be the largest project Mina has tackled to date in terms of size and budget. And, this overhaul will require precise restoration to return the Sanders House to its former glory.

“The Sanders House is an amazing historic property,” said Mina. “It’s way more than I’ve ever taken on before, but I’m committed to bringing it back as the jewel of the neighborhood.”

“Part of our strategy at discovery+ is to serve our biggest fans by digging even deeper into their favorite shows and stories,” said Lisa Holme, Group SVP of Content and Commercial Strategy for Discovery, Inc. “By focusing on one epic project, Good Bones: Risky Business takes an exciting new step for this franchise and it’s a perfect streaming complement to the hit HGTV series.”

What do you think? Are you excited to see more of Good Bones on HGTV? Will you check out the spin-off on Discovery+?

Love, love, love this show! It is my favourite!!

We love them! We live in central Indy and this is close to home. Just want to see Mina and her Mom do more hands on the tearing down and hammering like in the beginning.
Love the improvement to the neighborhoods.
Maybe take a leap and do a rural home. Thats what we would buy.

Good Bones is an OK show. I grew weary of all the reruns. I won’t be seeing the new show on Discovery+ along with many others. I don’t think it is necessary to pay $ to see those shows.

I love the show, the way all of them seem like a family, and have so much fun.

I love this series on HGTV, but I really can’t afford Discovery+ so sadly one more series I’m being cut out of as well as thousands and thousands of other people. Why is it assumed that: 1. People can afford all the extra costs you have to pay to get Discovery+? 2. That people are able to stream at a reasonable speed to even make it possible if you did pay? I’ve been told by my provider it’s not worth my while paying extra to hopefully stream programmes because it just is not possible. For example, if I try to… Read more »

That sounds wonderful and I’d love to see Good Bones Risky Business but I can barely afford cable now. I can’t pay an extra $5 for + and $5 for Max and $5 for Peacock. I’ve followed them since they started but I guess I’ll have to hope it will air on regular cable in a few years. It’s disappointing but I’ll live.

I wished they’d quit doing these “spinoffs”. All they are is re-arranged reruns.

I enjoy watching this show each week. Love Mina and especially Karen. The whole crew is great. Never missed a show. Congratulations on the birth of your daughter!

I could watch them all day. Love all the color they use. Please keep airing them. Love it