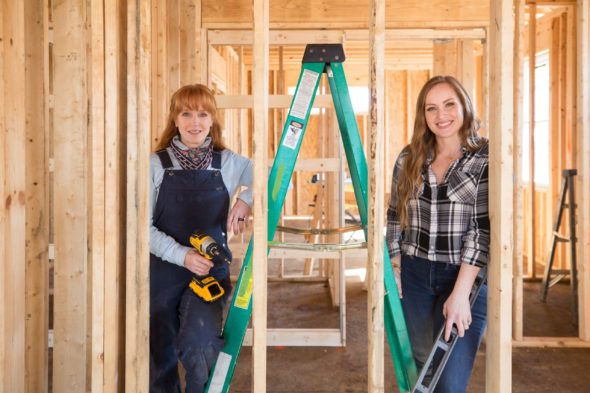 Good Bones is not going anywhere. The popular series has been renewed for a sixth season on HGTV. The cable channel has ordered 14 episodes for next summer featuring mother/daughter team Mina Starsiak Hawk and Karen E Laine as they renovate houses in their hometown of Indianapolis.

HGTV revealed more about the renewal of the makeover series in a press release.

“With the current season of Good Bones on pace to be the highest-rated of the series among P25-54 and W25-54, HGTV has ordered 14 new one-hour episodes of the hit show starring popular mother/daughter duo Mina Starsiak Hawk and Karen E Laine who help revitalize homes in their Indianapolis hometown.

On HGTV’s digital platforms, Good Bones has been the #1 most-watched series on HGTV GO since June 9, and content supporting the season has generated more than 4.3 million video views across HGTV’s Facebook, Instagram and Twitter accounts and 5.8 million page views on HGTV.com.

The new season of Good Bones is scheduled to premiere in summer 2021, but fans don’t have to wait until next year to see more beautiful renovations from Mina and Karen. New episodes continue to air on Tuesdays at 9 p.m. ET/PT through Sept. 8 on HGTV, as Mina, a real estate agent and soon-to-be mom of two, and Karen, a lawyer, buy the most dilapidated properties in their favorite Indy neighborhoods, demo them down to the studs and completely transform them into gorgeous, functional family homes.”

What do you think? Are you a fan of the Good Bones TV series? Will you check out the new season of this HGTV show in the summer of 2021?

Love this show. One of the few that actually show the stars working and dirty and they are revitalizing their community!

This is the only home makeover show I watch. I have watched all the series shows multiple times and still enjoy them. Hurry summer 2021!!!

I love watching the girls, and the ideas they come up with. Big fan.We have a small mom and dad shop in Missouri where we make custom furniture and do a lot of repairs to antiques. I like seeing what ideas you all come up with.

Best reno show ever, because of their all a family. Great senses of humor make them all so lovable. Producers are very good on this show.

We live to watch our “Gingers”. They t smart and do hard work that is gorgeous. I live in a house that’s falling apart Built in 1936. Needs help like Mina and Karen

I love this show they are so real and love there designs Karen is a hoot will hope this show is on for along time t is so refreshing which we need in our lives, and congratulation on the little girl I bet Jack is so happy Love you guys

Love the cast of Good Bones. Best HGTV series. Please bring them back before summer of 2021.

Please cancel ‘Good Bones’ or ask Karen to retire or replace her.

Yes I enjoy the show. I love it when women take on roles that are mostly for men. The small house that fell and became a new build was the only one in my price range. Were any of these houses rentals before they bought them and renovated them? Mina be good to your mom. Is Corey married?

Luv the show watched from the begining