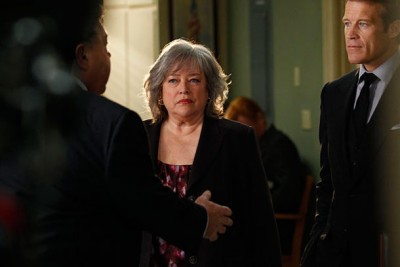 […] about NBC’s cancellation of the Harry’s Law TV series? Well, The Globe and some of their readers are as well, reports […]

What the networks don’t understand is a lot of the ‘desirable’ 18 to 49 demo is now getting TV online. The old Nielsen ratings are outdated. The people who tune into real network TV are generally older people who don’t have streaming internet. It’s the reality. I wonder how far down the reality ******* does network tv have to go before network execs figure out how to gauge online viewership?

[…] Law (NBC) Kathy Bates and company won’t be back for new cases next year. The series attracted a lot of viewers but not enough in the key […]

I am 57 and my parents are in their early and late 70’s. They are both in a nursing home and my Mom has and calls everyone to watch Harrys Law. I got her watching and she loves it. She has all her friends watching this show. My father is a advid sports watcher. He doesn’t watch nothing on prime-time, unless it is sports afilliated. I don’t understand, but I guess it is not for me to. All I can say, it is a shame!

We love Harry’s Law very much! It is so sad !

Well I knew it was too good to be true. A TV show written to make sense, be intriguing,
interesting and with great acting to boot. No more NBC for me. I can’t even stand
to watch the NBC news anymore. It is almost like the entire network is a complete phony
interested only in reality shows. CBS seems to be getting IT!
I guess that is the network I will be watching more often. By the way, you may not appreciate ny 41 years but I would bet that I spend almost twice as much money as those
10 years younger than myself.

What’s wrong with you people…………..Harry’s Law was one of the best shows on TV and I always looked forward to watching it. So what are you going to put in it’s place, another awful reality show?
It was a great show with terrific actors. Doesn’t seem like you can handle the good shows because you keep taking them off and replacing them with bad shows.
I don’t watch prime time much anymore for the above reasons. Guess another night will go to a Netflex movie…………………
Carol.

I can’t believe they are canceling this show. Anything Kathy Bates is in is excellent. This is horrible news. Very disappointed!

Well, once again NBC is proving why they’re in last place. I used to watch NBC a lot, but I agree with most of the comments I have read, it’s hard to find good programming these days. Yes, I am in that “undesirable” demo…I’m older than 25, but I promise I have more disposable income than I did in my 20s and 30s. Harry’s Law was finally a well written, well acted show that not only tackled controversial subjects, but did it in an entertaining, intelligent, humorous way. I guess the pin heads that made the decision to pull the… Read more »

I totally agree with all previous comments! I,too,loved Harry’s Law and it is mind boggling to me why a fantastic show like this would be cancelled and stupid reality shows are kept on tv. I will really miss tuning in on Sunday or Wednesday to see some Great entertainment. Now the only show I watch(other than news programs) is Days of our Lives–Please don’t cancel this one.

I am really surprised to hear that Harry’s been cancelled. Just when you think there’s something to watch on TV!! I guess since it’s not a stupid reality show!!!

When I heard that Harry’s Law got cancelled, it was a big shock to me and my wife. It not only was entertaining and funny, it tackled current event topics.
It is just another step down for the lowest rated network, which believes in have 2 drunk women host a show in the AM and cancel quality shows.
Once 30Rock finishes it’s run this year, Sunday Night Football is the only time NBC will be on our NON-Nielson box TV’s – so we don’t count anyway

I cant believe NBC would cancel this show! My whole family loves it, and we enjoy discussing what happened on the show. The characters are fun, and the show is inspiring. It shows more of real every day cases rather always murder like LA law. Boooo NBC!

This was a good show. Not only for the young generation but those of us over 50. When are these Cos. going to get it and have a demo of 40-60!!! We have the $$ too spend on their ads. products.