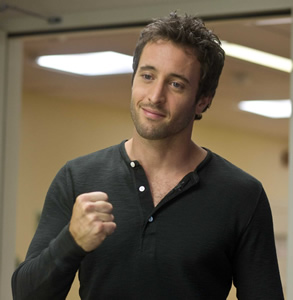 GIVE IT A CHANCE, WE MIGHT BE SURPIESED AT HOW GOOD IT IS

Dan: this or any other site is NOT the place for putting down African Americans, or any other race or nationality. Go someplace where you belong….like the middle of ‘Siberia….Not nice. Alex (if he were pink and green stripped) would do a terrific job on move or tv show he did. AND Moonlight fans, I have the DVD, have played it so many times I know the lines of almost all 16 episodes, however, beating a dead horse doesn’t make sense. The dynamics between Beth and Mick would be quite different …. I say go for a movie in the… Read more »

I am looking forward to the remake of Hawaii Five-O. Obviously, there are the die-hard fans of the original who are not willing to give this version a chance for whatever reason and that’s OK but it’s been 30 years now since the original aired – what better time for a remake! I hope CBS gives this version every opportunity to succeed because TPTB at CBS have been all to quick to pull the plug on new shows without really giving them the chance to get off the ground. Done the right way – Hawaii Five-O can be a huge… Read more »

i think it will be okay if they keep it to the original because it was a very clean show and steve mcag ‘; was not a ladies man i think he has two loves on his show but at least he was a gentleman about it and in real life he was always respected for his life in tv and off as well he was married for years and i think it would degrad his name to have it any other way areally big fan virginia ann

i am glad that Hawaii Five O will be back on. This is the type of show that we need in today society. I love Hawaii Five O the original and I will without a dout watch the new series.

Alex O’Loughlin? I do not like his face at all.
Probably, Alex O’Loughlin will be exchanged by the better actor after Pao Lotto.
Alex is not fit for a leeeeead. Alex has been trained professionally to do stunt work so if he decides to give up being the leeeeeeeeeeead…… well he will have a job! LOL

I never seen the original but heard abour rumors of a remake since christmas so I’m looking forward to it.

Already a huge fan of NCIS AND NCIS:LA, so a crime show in Hawaii is great!!!!

I really think they should have used something from the past series to tie the old series in with the new proposed series. I own the original 1968 Ford Fairlane 500 convertible that was used in 6 episodes of Hawaii Five-O back in 1968. It was used in “Tiger by the Tail,” “No Blue Skies,” “Deathwatch,” “Up Tight,” “By the Numbers,” and “24 Karat Kill.” In “24 Karat Kill,” the words “Book ’em Danno” were first spoken by Lord. Ford gave the Fairlane to CBS, and shipped it to Honolulu, Hawaii where it was picked up by Mr. Bernard Oseransky.… Read more »

I agree totally with you. I seldom watch TV because there is so little real drama other than the ones that always deal with medical emergencies and are a lot like soap opera’s.

I like the idea but admittedly mainly because of Alex O’Loughlin. I just hope that it keeps enough references to the original so that we have a clue what we’re looking at. If you mess with an original you better remind us of what we’re looking at but make it even better than the original to hold our interest. Otherwise why not just create a whole new show. Please don’t make the same mistake that was made making Miami Vice into a movie. Despite the great Jamie Foxx and Colin Farrell, there were just not enough references to the original… Read more »

Oh, HELL YES!!! I’m completely stoked about this, and I generally HATE, HATE, HATE all the remakes and pre-packaged marketing concepts Hollywood is addicted to. But Alex in a beach setting, playing an ex-SEAL will definitely rock!!

No. I am not excited at all by the remake of Hawaii Five-0. Fist of all, it was a great show that I don’t feel should be messed with. Everytime I turn around someone is taking a beloved show of mine and revamping it. What are these writers being paid for? Second, statistically remakes never ever ever make it. A feature film would be okay since I enjoyed several, but week after week never. Look at: Knight Rider, Bionic Woman, Melrose Place, just to name a few. I would like someone to name a remake that is still currently airing.… Read more »

I wish Alex luck, but I’ll be surprised if this remake goes…..and I sure as heck don’t trust CBS. Even tho there is a darn good chance I’ll watch the network since Tom Selleck is due to be in “Reagan’s Law” on CBS. I’ll watch Tom Selleck read a phone book ! (smile) I’m afraid Alex doesn’t have the ‘star power’ to hold a series on his own right now. Moonlight was a fantastic NEW, and DIFFERENT series that CBS goofed on. But it had an ensemble cast that was brilliant. And I’m so sick of remakes right now e.g.… Read more »