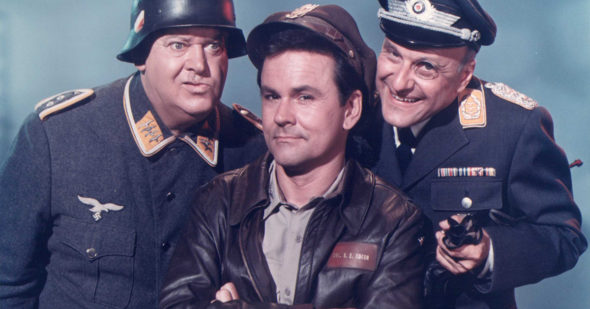 Is Hogan’s Heroes making a comeback? Deadline reports a sequel to the classic TV show is in the works.

The original sitcom launched in 1965 and “centered around a group of Allied POWs imprisoned in a German prison camp, led by U.S. Colonel Robert Hogan, who secretly used the camp to launch Allied espionage missions.” The cast included Bob Crane, Werner Klemperer, John Banner, and Richard Dawson. The series ran on CBS through 1971.

Now, Hogan’s Heroes co-creator Al Ruddy is developing a sequel to the 1960s series that will follow the descendants of the original characters. A network is not currently attached, but Rough House Pictures is producing alongside Village Roadshow Entertainment Group.

What do you think? Are you a fan of the original Hogan’s Heroes? Would you watch a sequel series?

Probably not. I may watch the first episode out of curiosity if it was released, but more than likely it just won’t be the same without the original cast. I have this total obsession with John Banner (Sergeant Schultz) right now and I just can’t imagine “anyone” replacing Mr. Banner or who I call my Beloved Schultzy, actually… that includes the entire cast. Kinda hoping it don’t happen though because it may ruin the reputation of the original “Hogan’s Heroes” and might end up being something cheesy or bad acting, no offense to whoever’s wanting to do this, but I… Read more »

We have all the cds of all the episodes. We have a dog named Hogan. Yes yes yes, we will watch it!

Probably not, because I simply cannot imagine a plausible premise that would enable this to work. It’s another example of people not being able to think of any new ideas for shows, so they take an old one and run it again. This is a sad state of affairs indeed.

so basically its a show based off the movie “It’s a mad mad mad mad world” but you are just putting the Hogan’s Heroes name to it.

Yes if its funny has the old one

I would probably watch, but I’d have to see it before I said anything definite.

Love the show and would definitely watch the comeback! Can’t wait 🙂

I was a big fan of that a show, looking forward to see the new program, the sooner the better

As a fan of the original show, I would.

One of my favorite shows. I hope it will be entertaining. I’m surprised & happy he is still alive.

I was just thinking to myself last week that this is the one show they could never make a sequel to.

Yes I would watch it. Fan of the original show.