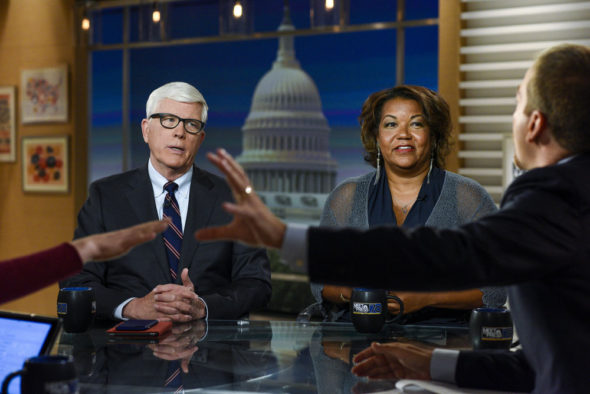 Well, there’s always radio. The Hugh Hewitt TV show has been cancelled after little more than one year on MSNBC. The lawyer, law professor, and conservative commentator announced his half-hour Saturday morning series was ending, during this morning’s broadcast. Watch it, below. In his announcement, Hewitt said that he would remain on the cable news network as a contributor and guest, continue to appear on NBC‘s Meet the Press, and would conduct more one-on-one interviews. Whether he meant those interviews would be for MSNBC or his Salem Radio Network series, is not clear.

Meanwhile, an early May Media Matters for America piece is getting some new attention. The report asserts, “Hewitt repeatedly used his employment at MSNBC to praise the Trump administration’s efforts to weaken the Clean Water Act, calling it one of the ‘accomplishments’ of President Donald Trump’s first year in office. But Hewitt and MSNBC did not disclose that one of his law firm’s clients is an oil and gas company that is currently litigating allegations it violated the environmental law.” The piece furthermore highlights that Hewitt is friends with EPA Administrator Scott Pruitt and that Hewitt’s son works for the EPA. That’s getting beyond our scope here, which is MSNBC’s cancellation of Hugh Hewitt, so be sure to check out that article for more details.

If Hewitt knew about the series’ cancellation in advance of the 8:00am ET broadcast, he didn’t let on, on social media.


Join me at 8AM EST on @MSNBC as I talk @realDonaldTrump and #NeverTrump w/@Hillsdale college president Dr. Larry Arnn, after talking summits and #SCOTUS w/ @ckubeNBC and @seungminkim


Join me at 8 AM EST on @MSNBC to meet the most influential conservative most on the left have never heard of:@Hillsdale president Dr.Larry Arnn plusa look at summits and #SCOTUS nominees w/ @ckubeNBC and @seungminkim

What do you think? Did you watch the Hugh Hewitt show? If it were up to you, would it be cancelled or renewed for a second season on MSNBC?

Never liked the guy. Now that I know of his connections to Pruitt and his law firm explains my disdain for him and his opinions.

I agree with you. I saw his show once and felt he was more suited for another network. He was argumentative and tended to sound like an ultra right wing and not a true conservative.

Hewitt is another crook out to enrich himself while destroying the planet.