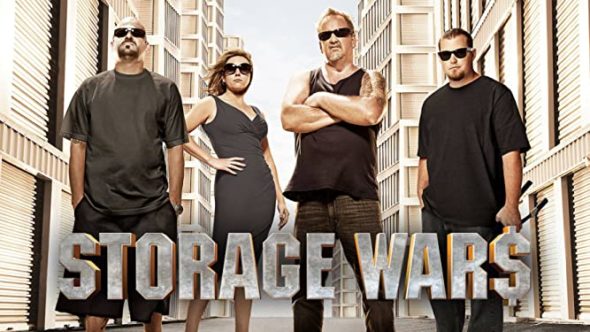 A&E has announced the launch of the Hustle & Tow series and the 13th season return of Storage Wars. Hustle & Tow is a brand new series that focuses on the lives of tow truck drivers while Storage Wars follows professional buyers of abandoned storage spaces. New episodes of both programs will begin airing on the cable channel on April 20th.

A&E revealed more about the season premieres of Hustle & Tow and Storage Wars in a press release.

“A&E locks in Tuesday, April 20 for the premiere of two original series. America’s favorite treasure hunters continue the search for valuable repossessed storage lockers with an all new season of the hit-series Storage Wars premiering on Tuesday, April 20 at 9pm ET/PT. Following the premiere of Storage Wars at 10pm ET/PT is new series Hustle & Tow documenting the dangerous world of tow truck drivers as they work to keep drivers safe.

Storage Wars returns to bidding, buying and selling for an all new season of wild auction battles in California. Fan-favorite auctioneers and buyers including Dan and Laura Dotson, Brandi Passante, Jarrod Schultz, Darrell Sheets, Kenny Crossley, Rene and Casey Nezhoda, as well as Ivy Calvin and his sons return to the lockers in search of the next big find. This season, viewers will join the thrill of the hunt at the fast-paced auctions for a look into the exhilarating, high-stakes world of storage auctions. Buyers go to the storage facilities, willing to risk it all, to bid on the contents of lockers and if they’re lucky, find treasure not just trash! Storage Wars returns for some of the best (and worst) storage unit finds with two all-new back-to-back episodes on Tuesday, April 20 at 9pm ET/PT. Join the conversation on social media with @aetv by using #StorageWars.

Hustle & Tow pops the hood to take a close-up look at America’s unsung essential workers who perform daily under extremely dangerous conditions, despite every imaginable encounter with unexpected terrain, wildlife and weather: tow truck drivers. These hard-working men and women respond to a massive array of calls from recovering stolen cars, to handling contentious impounds, clearing behemoth big rig wrecks, rescuing families who have veered off the highway and much more. Embedded with diverse shops and drivers in both rural and urban communities across the country, “Hustle & Tow” offers viewers a rugged “day-in-the-life” perspective on tow truck drivers, where depending on the call drivers can either be hailed as heroes or labeled as villains. These drivers – part-mechanics and part-first responders – endeavor to keep the country mobile while moving from one call to the next to get the job done. Hustle & Tow premieres with back-to-back episodes on Tuesday, April 20 at 10pm ET/PT. Join the conversation on social media with @aetv by using #HustleAndTow.”

Check out the sneak peeks for both reality shows below.

What do you think? Are you a fan of Storage Wars? Do you plan to watch the return of that series and the arrival of Hustle & Tow on A&E next month?

You need to contant Chacon Towing out of San Antonio. Their towing business is family owned and ran and huge! The Chacon family is amazing and remarkable. Never a dull moment !!

I like Storage Wars and I’m happy that Dave Hester won’t be back. I liked Mary and was hoping to see her back. She’s like the grounding influence on this show. Where’s Mary Padian?

For me it’s entertainment, that’s what I’m looking forward to. Welcome back!

I hope it isn’t 75 percent staged like the other shows.

100%? I don’t think so. Every once in a while A&E might add a treasure to their storage locker, but look at it as a learning experience. We are learning the history and use of something that most of us have never seen before.