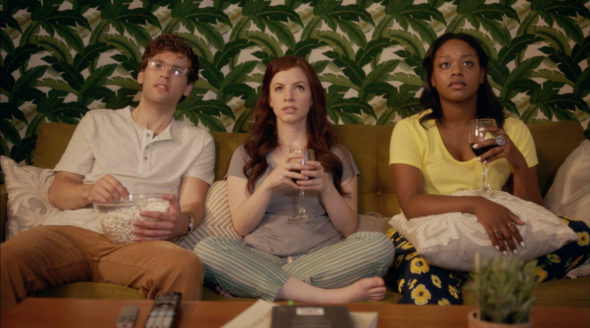 TV show description:
From creator Yulin Kuang, the I Ship It TV show began as a digital short in 2016 and spent its first season as a web series on The CW Seed platform. For its second season, The CW broadcast network ordered it as a regular TV series.

The musical comedy centers on Ella (Highfield). Although she works at a boutique shipping agency, she doesn’t exactly feel like she’s realizing her dreams. Ella is an aspiring writer and devoted fangirl of the show Superstition, about which she’s been known to write fan fiction.

Ella works with her boyfriend, Tim (Neldam). Although he’s possessed of a certain sort of charm, Tim is a little on the mundane side. The two live next door to Ella’s best friend, Winnie (Raycole), who is also obsessed with Superstition.

Ella’s friend, Sasha (Al-Bustami) is an actress. One day, she places orders a flower delivery for the Superstition showrunner. Taking the bull by the horns, Ella decides to make the delivery herself, in order to visit the set. This inspires her to quit her job at the shipping agency and take a position as a production assistant (PA) on Superstition.

Now that there are even fewer walls between her real life and Superstition, Ella finds reality and fantasy smacking up against each other, which affects both her personal and professional lives.


What do you think? Do you like the I Ship It TV series? Should this CW TV show be cancelled or renewed for another season?