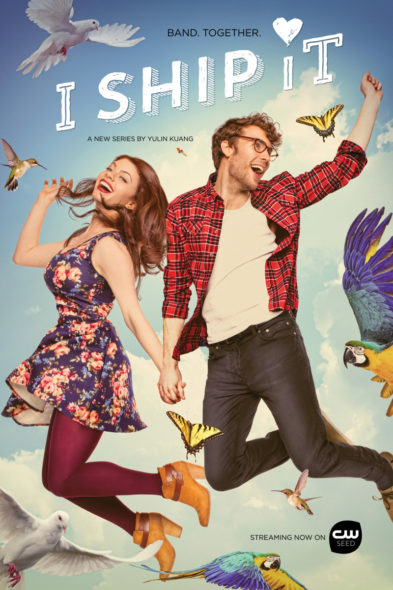 Are you obsessed with the second season of the I Ship It TV show on The CW? As we all know, the Nielsen ratings typically play a big role in determining whether a TV show like I Ship It is cancelled or renewed for season three. Unfortunately, most of us do not live in Nielsen households. Because many viewers feel frustration when their viewing habits and opinions aren’t considered, we’d like to offer you the chance to rate all of the I Ship It season two episodes here. *Status update below.

A CW musical comedy, I Ship It stars Helen Highfield, Riley Neldam, Yasmine Al-Bustami, Jazz Raycole, Kristen Rozanski, Marissa Cuevas, Ethan Peck, Gita Reddy, David Witts, and Gabriel Freilich. The story centers on Ella (Highfield). Although she works at a boutique shipping agency with her boyfriend, Tim (Neldam), she doesn’t exactly feel like she’s realizing her dreams. Ella is an aspiring writer and devoted fan girl of the show Superstition, about which she’s been known to write fan fiction. After a chance visit to the set, Ella quits her job and joins the production as a PA. Now her personal and professional lives and smacking up against one another in new ways.

What do you think? Which season two episodes of the I Ship It TV series do you rate as wonderful, terrible, or somewhere between? Should The CW cancel or renew I Ship It for a third season? Don’t forget to vote, and share your thoughts, below.

*9/2/19 update: The CW pulled I Ship It after only two episodes had aired. The network released the remaining four episodes online. It seems unlikely that I Ship It will be renewed for a third season (at least for regular television).