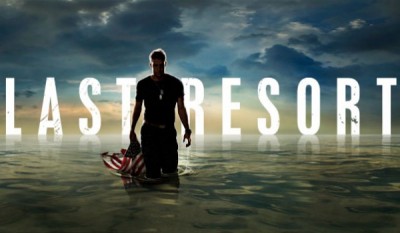 The alphabet network has released details about the final episode of Last Resort. Though the network calls it a “season finale,” everyone involved with the show acknowledges that it won’t be back for season two.

Unlike fellow cancellation casualty 666 Park Avenue, at least we know that ABC will actually air the final episode of Last Resort. The last installments of 666 may air this summer.

A VIOLENT BATTLE ERUPTS ON THE SUBMARINE – CAN MARCUS AND SAM TAKE CONTROL BEFORE IT’S TOO LATE? — ON THE SEASON FINALE OF ABC’S “LAST RESORT”

“Controlled Flight Into Terrain” – In the exciting season finale, a violent battle for control erupts on the submarine, which leaves the Colorado vulnerable to capture by a third party — one with an exploitative plan. Can Marcus and Sam take control of the sub before it’s too late? The season finale of “Last Resort” airs THURSDAY, JANUARY 24 (8:00-9:00 p.m. ET) on the ABC Television Network.

“Controlled Flight Into Terrain” was written by Karl Gajdusek & David Wiener and directed by Michael Offer.

What do you think? Will you be tuning in? Do you think the series finale of Last Resort will be a satisfying end?

WTH is up with these idiots! They finally make something great and they always cancel it…now they will probably replace it with some sort of lame retarded reality show. Sick of this crap “Last Resort” was AWESOME TV!

One of the only quality shows on tv these days. Great cast, great story, and a total shame that it’s been cancelled.

Those executives at ABC sucks!!! The only good show “Last Resort” they have on their network and it’s cancelled. I hope another network would pick them up,

what a huge shame. the show could not have been better written or acted. every episode was amazing and full of excitement. with all the real garbage on our tv’s today how can such a quality program be cancelled. the time slot was extremely differcult and yet it held its own. each character was well liked and the story line engrossing. if there is a way the viewers could rally together to bring the show back, i wish it would happen. at the end of the show we see the top portion of the sub on the bottom of the… Read more »

I love last resort please DO NOT CANCEL IT!!!!!

I generally do not watch TV, especially soap operas. This program was by far the best TV program that I have ever seen. I never would find myself watching a soap, but this one was outstanding. It had everything that would keep anyone that took the time to watched it, coming back for more. I hope it gets picked up by another network. As a former Navy officer, that understands the oath of the Seaman and especially what it takes to be the Capt. Of a Boomer, maybe the subject matter was too much for the powers to be. Maybe… Read more »

I am so disapointed that the show was cancelled. I thought it was one of the best shows on tv this season, and looked foward to watching it every week. It is unfortunate that todays television viewers would rather watch “Honey Boo Boo” then a show with some real substance. Boooo to the executives at ABC!

Very disappointed that this series was cancelled. Excellent cast and good st0ries. Unfortunate.

I enjoyed Last Resort upto the Coup; there is lost creditiblity. But I still watched.
The Finale was less than I hoped for, but it was about the only conclusion that had in the time remaining. I would love to read the book for the full story of where they wanted the show to go… if they actually had a destination.

Great show. Better than its ratings. Great characters. Significant questions raised ….and answered.
Sorry it was cancelled. I will miss it. Satisfying conclusion.
But I was rooting for the French girl.

I really like Last Resort but at least they let the final episode air, I was short and sweet but at least wrap up the story. Much preferred to awful ending to the series Lost which was totally lame and didn’t do anything that had be promised